While Modi was in transit, the anti-India propaganda was underway vigorously. Today (September 22 in the U.S.) was a virtual meeting dubbed, “Congressional Briefing: Biden-Modi Meeting must focus on Human Rights Violations in India,” except there were no members of the Congress to the best of my knowledge. I attended it and would be remiss without mentioning the pre-recorded messages by Democratic Senator Ed. Markey and two members of the House of Representatives Andy Levin and Marie Newman.

The so-called briefing was sponsored by none other than Indian American Muslim Council and Hindus for Human Rights. The selected actors/ speakers included John Prabhudoss, Nikhil Mandalparthy, Rasheed Ahmed (can’t find any link), Govind Acharya, Nadine Maenza, Harsh Mander, and John Sifton. I hope I did not forget anyone. If I were to characterize these comical actors in one phrase, it would be the “passionate anti-India propagandists,” who spitted “hatred” in every other statement in the name of India promoting “religious nationalism.”

The preselected speakers were coached and/ or coerced to stay with the “anti-India” theme calling attention to Modi’s “hate-rhetoric” policies and practices.

Clearly, it was happening on the heels of the Modi-Biden meeting aimed at seeking attention about the alleged human rights issues in India against the religious minorities, specifically, the Muslims, and Christians, and most strikingly, the Dalits being added to their narrative. These speakers had a vendetta against the current Modi government and they were attempting to distract the first Modi-Biden meeting from the Strategic U.S.-India strategic alliance to other issues.

I am afraid that what they discussed is just the noise on the periphery and the propaganda. Among other things, the most critical agenda item for Modi-Biden is how to keep China from continuing to spread its wings in the South China sea. The QUAD includes the U.S., India, Japan, and Australia have joined hands to contain China’s expansionist policies. In fact, Modi will be meeting the leaders from Japan and Australia too during this visit.

Let us discuss a few examples from today’s so-called Congressional briefings. One was the tightening of the flow of foreign funds to suspect NGOs like Amnesty International allegedly engaged in anti-national activities. Govind Acharya was bitter because FCRA rules are tightened for greater transparency and accountability. He also alleged for weaponizing laws such as UAPA (Unlawful Activities Prevention Act) which, according to him, is a tool for harassment, slow investigation, and delayed justice. Just imagine who will be fearful of transparency and laws against unlawful activities – only those who have something to hide and/ or have engaged in unlawful activities. I know about FCRA firsthand which has become somewhat cumbersome but, I did not care if it is in the national interest.

Not surprisingly, the USCIRF chair Maenza acted as a mouthpiece of religious minorities in India, particularly, the Muslims to propagate hatred against the Hindu majority of India. It was mentioned that her visa to India was denied and I hope it stays that way. It was nothing new but the reiteration of her narrative alleging India’s continued intolerance for religious minorities, citing the CAA and non-existent NRC (at least not yet), and removal of Article 370, etc. As the current Chair of USCIRF, she is bound to sing the song which she is responsible for composing in the first place in the 2021 annual report.

USCIRF labelled India as a Country of Particular Concern (CPC) hoping to have the State Department impose a travel ban or other punitive measures. I will not repeat my strong condemnation of the prejudiced commissioners published earlier[1]. I can’t blame Maenza for her frustration that her own visa is denied, she has not yet succeeded in getting the U.S. government to make a public statement about India to her liking. However, listening to her presentation and monitoring the USCIRF website, I am afraid that she is already preparing a narrative to label India again a CPC in 2022.

I can comment at length for every speaker but in the interest of space and respect for the reader’s time, let me cite Harsh Mander, no stranger to the readers in India. I did not know much about this human rights activist until today, specifically, the recent news about the Enforcement Directorate searching his residence, the office of the NGO, and two schools he runs[2]. Reportedly, there are serious allegations of wrongdoing and the ED acted with the cognizance of Delhi police. In fairness to Mander, he did not mention ED searches. He claimed that the Modi government is practicing an “undeclared’ emergency which is more sinister than the Emergency in 1975 by Indira Gandhi.

According to him, the most worrying threats include open war against Muslims and Dalits, laws that curtail human rights, runaway hate speeches by the Home Minister and Chief Ministers against Muslims. He claimed that India had the harshest lockdown imposing social distancing on people living in tight spaces and thus causing greater distress. He minced no words in comparing the terrifying stories of lynching of Dalits in India with the lynching of African Americans in the United States. He alleged that the interfaith marriages in India are being mislabeled love-Jihad which some states like Uttar Pradesh have outlawed if there is a complaint alleging forced conversion. The presentation by another very vociferous critic of India, John Sifton, is available here[3].

What did I hear and learn is nothing but rehashing of the absolute “negative” narration about India under the current BJP led government in New Delhi? Every speaker had a narration without a single “positive” or any credit for India’s aggressive infrastructure development, Make-in-India initiatives for self-reliance, excellent handling of Coronavirus in spite of unfortunate deaths due to poor health facilities, India’s indigenous vaccine development, and administration of over 25 million shots in one day. The preselected speakers were coached and/ or coerced to stay with the “anti-India” theme calling attention to Modi’s “hate-rhetoric” policies and practices. If the goal for the speakers was to compete and win the race for being the highest-ranking India-hater, they earned a grade of A for their unfettered success in propagating the anti-India narrative.

It is important to note that the hosts of the Zoom presentation had “disabled attendee chat,” disallowing and not welcoming any dissenting views or questions. The hosts, Hindus for Human Rights, and Indian American Muslim Council had only an agenda to create a premeditated negative narrative about India and Modi government. Even the questions were premeditated and asked the presenter who was predetermined. What a show of deception under the cover of “Congressional briefings.” A couple of questions were interesting, I thought. The issue of acting U.S. Ambassador meeting with the RSS Chief was raised. It was alleged that RSS is ruling the country which is a paramilitary, extraordinarily racist, and autocratic ideology.

Another question was about a statement that India is ready for “Historical Injustice” by India’s Minister of External Affairs during the Secretary of State visit. They wondered why such a question and what did it mean? Then someone answered that it may be related to Muslim rulers plundering India’s wealth 800-900 years ago. It seemed like a monologue among the organizers and speakers.

The premediated Zoom conference with pre-selected speakers with no opportunity for questions/ comments/ dissenting point of view was yet another attempt to malign India not too long after the DGH[4]. We say that technology is the best tool for promoting democracy and free flow of information and exchange of ideas but today’s event proved it otherwise. I saw the e-democracy being strangulated yet the USCIRF, paid for by the taxpayer dollars, was on this kind of platform.

It is in fact just the beginning of the anti-India narrative during Modi-Biden talks; two separate demonstrations are planned by the same players in Washington D.C. and New York City. I am afraid that more is yet to come as India continues on the path of development, democracy, and defending herself against the potential neighboring aggressors. May the US-India strategic alliance continue to move ahead and the oldest and largest democracies thrive despite the efforts and threats by the propagandists to dismantling the alliance and democracy.

[4] My Reflections on Dismantling Global Hindutva (DGH) conference and its Perpetrators – Sep 15, 2021, PGurus.com 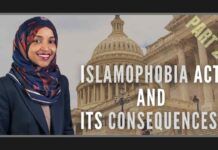