‘Our strategic partnership has deepened so visibly’: EAM S Jaishankar

The US-State Department spokesperson Ned Price said that during the meeting held on Friday in Melbourne, India’s External Affairs Minister S Jaishankar and US Secretary of State Antony Blinken have discussed cooperation on “diplomatic efforts in response to Russian aggression”.

This was the first in-person meeting between Jaishankar and Blinken since they met in October in Rome on the sidelines of the G20 meeting.

The Jaishankar-Blinken meeting took place as the White House unveiled its Indo-Pacific strategy that laid down “support India’s continued rise and regional leadership” as one of its objectives.

Price said that both the countries reviewed the progress in broadening and deepening the US-India Strategic Partnership, which is critical to promoting peace, security, and prosperity in the Indo-Pacific region and beyond.

Price added, “Secretary Blinken and Minister Jaishankar discussed efforts to strengthen Indo-Pacific cooperation through the QUAD and expand cooperation on common priorities, including reinforcing the rules-based international order. Secretary Blinken and Minister Jaishankar also discussed cooperation on fighting the COVID-19 pandemic, diplomatic efforts in response to Russian aggression, the challenges we face in Afghanistan, placing Burma back on the path to democracy, and other issues of mutual concern.”

“We recognize that India is a like-minded partner and leader in South Asia and the Indian Ocean,” the strategy crafted by the National Security Council said.

Jaishankar tweeted after his meeting with Blinken: “Our strategic partnership has deepened so visibly.”

He said in his tweet, “A review of our bilateral cooperation with US Sec Blinken. The readout on progress in different domains was positive. Our strategic partnership has deepened so visibly.”

A review of our bilateral cooperation with @SecBlinken. The readout on progress in different domains was positive. Our strategic partnership has deepened so visibly. pic.twitter.com/LuBkYKa01l

New Delhi has put on a delicate balancing act on tensions in Europe where Russia has deployed troops near the borders with Ukraine and the US and Britain warn of an imminent invasion. When the US brought up Ukraine at the UN Security Council last week, India abstained from voting on a procedural issue in a seeming throwback to its non-alignment.

A joint statement by the four top diplomats called for the elimination of terrorist safe havens and for bringing to justice the perpetrators of cross-border terrorism.

Without naming China which poses a common threat to the four countries, the Ministers said: “QUAD partners champion the free, open, and inclusive rules-based order, rooted in international law, that protects the sovereignty and territorial integrity of regional countries.” 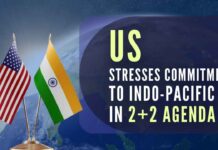 US stresses commitment to Indo-Pacific, defence partnership in 2+2 ministerial meet with India

NaMo: Had Sardar been PM, Kashmir issue would not have occurred...