[dropcap color=”#008040″ boxed=”yes” boxed_radius=”8px” class=”” id=””]C[/dropcap]ongress president Sonia Gandhi’s son-in-law Robert Vadra is not a media-savvy man. So, on Sunday when he gave a rare interview to a news agency and claimed that he was the victim of a political witch-hunt to divert attention (he did not explain from what), it generated a great deal of interest.
What compelled Vadra to come out of his shell and try to defend his role in several controversial land deals? Does he fear his arrest by the Haryana Government? Does he suspect that the Modi regime will go after him to arm-twist the Congress to cooperate with the Government for the smooth-functioning of the parliament? Has Vadra sensed that the Dhingra commission set up by the Haryana government to probe the land deals might recommend his prosecution? Many such questions surfaced both in the social media and political space.
The Vadra interview invited strong reaction from the BJP with party spokesperson Sambit Patra saying “Robert Vadra’s comment indicates that he is extremely scared,” and Haryana Health and Sports Minister Anil Vij tweeting: “Vadra ne jo haasil kiya sab rajneeti ki badaulat hai, veh rajneetik purja hai. Jaanch se humara kuchh lena dena nahin, aayog sifarish karega toh thok jaroor denge (Whatever Vadra has achieved is due to political patronage. He is a political tool. We (Haryana government) have nothing to do with the inquiry. If the inquiry commission recommends, we will fix him).
[dropcap color=”#008040″ boxed=”yes” boxed_radius=”8px” class=”” id=””]W[/dropcap]ell, why does the Haryana government need a judicial commission’s recommendation to “fix” Vadra when the BJP has gone around claiming that he was a “crook” who conspired with the previous Congress Chief Minister Bhupinder Singh Hooda to loot the resources of the state in land deals?
The BJP may have political motive to tarnish the name of a member of the first family of the Congress, but the fact remains that the Comptroller and Auditor General (CAG) has also pointed out irregularities in Vadra’s land deals.
Let us first take a look at the findings of the CAG, which examined cases of nine firms which applied for 14 commercial licences in Sector 83, Gurgaon and discovered that Vadra’s firm was among the companies which did submit documents on financial adequacy. The report hinted that Hooda might have favored Vadra and realty giant DLF and such action caused huge loss to the government exchequer…
[dropcap color=”#008040″ boxed=”yes” boxed_radius=”8px” class=”” id=””]T[/dropcap]he auditor’s damning reports make the following observations against Vadra’s land deal. “The applicant has not submitted any documents in respect of financial capacity… name of the director alone was mentioned.” “No uniform criteria/ benchmarks were applied for assessment of financial adequacy with the result that appraisal was ad hoc and varied from case to case”.
Here are some of the findings:

[dropcap color=”#008040″ boxed=”yes” boxed_radius=”8px” class=”” id=””]I[/dropcap]nstead of recommending a CBI probe on the basis of the CAG report or registering an FIR against Vadra, the Haryana government took the convenient route to bury the case by ordering a judicial probe by the former High Court justice, SN Dhingra. The commission is expected to submit its report soon.
Legally speaking, there was no need to set up a judicial commission in this matter. In 1996, when the CAG submitted a special audit report exposing the Rs 900 cr fodder scam, the then Bihar Chief Minister Lalu Prasad ordered a similar judicial probe to pre-empt the High Court from ordering a CBI probe in the scandal. The court saw through his design and asked the CBI to probe the scam on the basis of the CAG report. The CBI probe led to the arrest of Lalu Prasad and his subsequent conviction.
If the BJP was serious about fixing Vadra, any officer of the Haryana government could have lodge a police compliant that could have been converted into an FIR. There are enough materials available to make a prima facie case under sections Section 420 IPC – Fraud – Section 408 IPC- Breach of Trust, Section 120B IPC – Criminal Conspiracy.
Many of the charges against Vadra can be taken as cognizable offences in which the police are empowered to register an FIR, investigate, and arrest an accused without a court issued a warrant. It is obvious that if someone other than Vadra was part of such a scandal, the police would never have waited so long to arrest him.
[dropcap color=”#008040″ boxed=”yes” boxed_radius=”8px” class=”” id=””]E[/dropcap]ven if the police did not want to take such extreme steps on its own, it could move the court to seek Vadra’s custody for interrogating him about his role into alleged irregularities in grant of license(s) by the Department of Town and Country Planning to his company in Sector 83 of Gurgaon for developing commercial colonies in violation of norms and guidelines.
On the basis of the facts available in public domain, prima facie it is clear that a crime has been committed and the state was part of the conspiracy. The police investigation and conviction are two different aspects of a crime. First and foremost, the police have to probe the case and file a charge sheet, and then it would be for the courts to decide Vadra’s fate. But somehow the Haryana government has developed cold feet in dealing with the all-powerful ‘Daamaad Shree’ of the Gandhi family.
Judicial commissions are mostly set in India to give a long rope to an accused, and to let him escape the hands of law. Instead of complaining of a witch-hunt Vadra should thank the BJP government for treating him as the “true” daamaad of the country. Anybody else in his place would be behind the bars by now! 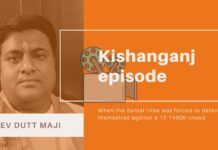 Land grab attempt foiled – how a few Santals fought a crowd of 12,000 on Jun 5 in Kishanganj 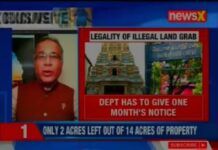 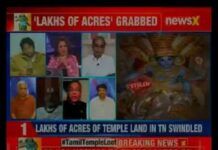