FTA is a win-win for both countries

The Australian Parliament on Tuesday approved the free trade agreement inked with India in April, paving the way for the rollout of the pact on a mutually agreed date. This would boost the trade between the two countries and is expected to have a volume of USD 45-50 billion in about five years. The pact is expected to come into force from January 2023.

The agreement, which was signed on April 2, would provide duty-free access to Indian exporters of over 6,000 broad sectors including textiles, leather, furniture, jewellery, and machinery in the Australian market. Labour-intensive sectors which would gain immensely include textiles and apparel, a few agricultural and fish products, leather, footwear, furniture, sports goods, jewellery, machinery, and electrical goods.

Thank you PM @AlboMP! The entry into force of IndAus ECTA will be greatly welcomed by our business communities, and will further strengthen the India-Australia Comprehensive Strategic Partnership. https://t.co/7gdaFNKTOw

Commerce and Industry Minister Piyush Goyal said the agreement is likely to push the bilateral trade to USD 45-50 billion in the next five-six years from the present USD 31 billion. This was the third such agreement signed by India, after the Mauritius and UAE trade pacts. “Australia will open 100 percent of their lines (products) with no restriction on even quota. This is the first time Australia has done this for any country…We see job opportunities when Australian investment comes here,” Goyal told reporters here in Delhi. He added that there will be harmonization of codes and customs regime on both sides so that “we can enter into force at an early date”.

Soon after getting approval from the Executive Council of Australia and assent from the Indian resident, both countries will fix a date and implement the pact. The India-Australia Economic Cooperation and Trade Agreement (ECTA) needed ratification by the Australian Parliament before its implementation. In India, such pacts are approved by the Union Cabinet.

Australian Trade Minister Don Farrell said in a statement that the ECTA will enter into force 30 days (or another mutually agreed time) after the respective parties have confirmed in writing that they have completed their domestic requirements. “The Albanese government has worked hard to expeditiously advance all processes necessary” to ensure that Australia is in a position to implement the free trade agreements before the end of 2022, the statement said.

Australia’s Minister for Trade and Tourism said they will work closely with the Indian government to implement the trade agreement “as soon as possible”. Under the pact, Australia is offering zero-duty access to India for about 96.4 percent of exports (by value) from day one. This covers many products that currently attract 4-5 percent customs duty in Australia.

India’s goods exports to Australia stood at USD 8.3 billion and imports from the country aggregated to USD 16.75 billion in 2021-22. The Australian Parliament has also approved an amendment to the Double Taxation Avoidance Agreement (DTAA), a move that would help the Indian IT sector in operating in that market. It would stop the taxation on the offshore income of Indian firms providing technical support in Australia.

India’s Commerce Minister Piyush Goyal said the Indian IT sector is the “biggest gainer” of that amendment. “If the tax will go, they can see a quantum jump in their business with Australia,” he added. The move, as per estimates, may lead to savings of about USD 200 million each year for over 100 Indian IT firms operating in Australia. 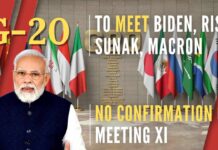 G-20: Modi to meet Biden, Rishi Sunak, Macron, etc at Bali sidelines. But no confirmation on a meeting with Chinese President Xi Jinping