There has been a furor after filmmaker Leena Manimekalai shared the poster of her film ‘Kaali‘ which depicts Goddess Kaali smoking a cigarette. The film poster has triggered outrage over the goddess’ portrayal.

Mahant Raju Das told the media, “Look at the recent events. When Nupur Sharma said the right things, it sparked fire across India, and across the world. But you want to insult the Hindu religion? Kya chaahte ho, tumhara bhi sar tan se juda ho jaaye (Do you also want your head to be separated from your body)? Is this what you want?”

The seer has urged the Union Home Ministry to take strict action against the filmmaker. He also asked the government to ban the movie.

“I request the Union Home Ministry to take the strictest action against her and to ban the movie. If actions are not taken, we will create a situation that will be difficult to handle,” the seer warned.

Mahant Raju Das said that the filmmaker can still be forgiven for her audacity if she apologizes now. “But if the movie is released, then we will create a situation that you won’t be able to handle,” he said.

Sharad Shukla, former general secretary of the Indian Youth Congress, also demanded a ban on the movie. “People who make such web series and documentaries should be put behind bars,” Sharad Shukla said.

Earlier Madhya Pradesh Home Minister Narottam Mishra had warned that FIR will be lodged against Director Leena Manimekalai if she does not remove the poster of the film Kaali.

An FIR has been registered against the film’s producer Leena Manimekalai in the Hazratganj police station, Lucknow under serious sections. On the complaint of an advocate Vedprakash Shukla, the police have registered an FIR against producer Leena, Asha Associate, and editor Shravan Onathan under criminal conspiracy, hurting religious sentiments, inciting, and serious sections of the IT Act.

The Vishwa Hindu Parishad has opposed the film, raising objections to the documentary film. Also demanded from the censor board that such a film should be banned immediately. Strict legal action should be taken against the filmmaker.

The trailer shows a woman dressed in the costume of Goddess Kaali. She is seen smoking a cigarette in the photo. Along with her usual accouterments of a Trishul (trident) and sickle, the actor playing the goddess is also shown wielding the LGBTQ+ community’s pride flag. 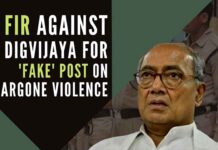 No question of ban, only its classification is being reviewed: Chief...