Atrocities on Hindu continue in Bangladesh

The atrocities on the Hindu community continue in Bangladesh and is far from under control. A group of assailants vandalized at least 66 homes and torched 20 homes of Hindus in Bangladesh over an alleged blasphemous social media post. This comes amid outrage over incidents of temple vandalism in the country.

According to local media reports, the attack took place late on Sunday at a village in Rangpur district’s Pirgonj Upazila, about 255 km from the capital Dhaka.

The unruly crowd torched 29 residential houses, two kitchens, two barns, and 20 haystacks belonging to 15 different owners in Pirgonj’s Majhipara. There were no immediate reports of casualties.

Sixty-six families in Rangpur’s Boro Karimpur fishing village have been displaced after their homes were destroyed in the violence. The perpetrators also vandalized two shops and two temples in the area, looted all valuables and cash.

The Hindu fishermen on Monday said their neighbourhood was attacked from all sides.

In major hooligan incidents earlier, the biggest Hindus festival, Durga Puja being under threat in Bangladesh The death toll in the communal violence in Bangladesh has increased to six, while at least 70 Hindu temples including the ISKCON temples were vandalized across the country, said Rana Dasgupta, General Secretary of the Bangladesh Hindu-Buddha Christian Oikya Parishad.

The spate of atrocities started on October 13 in Cumilla district, which quickly spread to other parts of the country including Chandpur, Noakhali, Kishoreganj, Chittagong, Feni, and Rangpur.

So far, seven police officials of Rangpur and Feni were withdrawn on an instant order issued by President Abdul Hamid. But the responsible officer in charge of Kotwali, Chittagong, is still in his charge.

Meanwhile, the country has also witnessed continued protests against the violence. On Sunday, thousands of people blocked the Shahbagh intersection in Dhaka for around three hours.

Joydeep Datta, a Dhaka University student, placed a seven-point demand in the protest programme. The demands include the highest punishment of the attackers, renovation of the affected temples, establishing a separate ministry or commission for the minorities, and compensation for the looted shops and houses of Hindus.

A five-member representative of the protesters went to the Prime Minister’s Office to place a memorandum with the demands. The protesters later withdrew their blockade setting a 24-hour ultimatum to fulfill their demands.

“If the government doesn’t fulfill the demands, we will block the Shahbagh intersection again and continue our protest,” said Joydeep. “We want exemplary punishment for those involved in these attacks,” demanded Prof Mihir Lal Saha, provost of DU’s Jagannath Hall, during the protest.

In a separate programme on Monday evening, the Progressive Student Alliance staged a demonstration in front of the National Museum and demanded punishment of the attackers, ensuring the safety of minorities and the resignation of the home minister for “his failure to provide security to minorities ‘.

In Chittagong, different organizations staged protest programmes demanding the arrest and exemplary punishment of the attackers.

Members of the Chattogram Mahanagar Puja Udjapan Parishad formed a human chain in front of the Chattogram Press Club. “If the attacks are not stopped, we would be compelled to declare tougher programmes,” they said.

In Cumilla, a 20-member delegation of Dhaka University Teachers’ Association (DUTA) on Monday visited puja mandaps of the Nanua Dighirpar area, which came under attack on October 13.

In Tangail, members Hindu community formed a human chain and staged demonstrations in front of the Tangail Press Club and Shaheed Minar.

In Munshiganj, a human chain and protest rally was held at noon. In Narayanganj, hundreds of people under the banner of ISKCON and Sree Sree Radhagovinda Temple brought out processions and marched through different streets.

In Lalmonirhat, several thousand people staged a demonstration and brought out a protest procession in the town.

Amid all the outrage, against the violence on the Hindu community, Bangladesh PM Sheikh Hasina said that strict action will be taken against the culprits.

So far more than 450 people have been detained and 71 cases have been registered so far and several have been arrested.

On Sunday, the Bangladeshi Hindu diaspora organized a protest in front of the Embassy of that country here to protest large-scale violence leading to the destruction of Hindu homes and temples during Durga Puja festivities across Bangladesh.

The message from the global community including top UN officials was prompted by a nearly week-long spell of communal violence targeting the minority Hindus during the just concluded Durga Puja celebrations.

The United States has condemned recent reports of attacks on the minority Hindu community in Bangladesh. 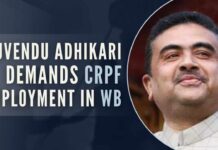