It is absolutely clear now. Rohingya Muslims from far off Myanmar didn’t come to Jammu after passing through no less than six states of West Bengal, Bihar, UP, Haryana, Punjab and Delhi on their own. They were brought and are being induced by Kashmiri Muslims to come to Jammu and settle there. And the process of illegal settlement was started way back in 2008 when the pro-autonomy National Conference and Congress coalition was at the helm of affairs.

Terrorist organisations like Hizbul Mujahideen are also standing solidly behind them and they have warned the people of Jammu that they would be taught a lesson if they harassed them.

“I crossed into Bangladesh from Burma (Myanmar) when persecution of Muslims became unbearable. From Calcutta, I shifted with my family to Delhi where I begged for food to keep myself and my family alive. It was in Delhi that I met a Kashmiri who told me J&K was a state in India where Muslims lived in the majority. I came here in 2008,” Molvi Yunus says.

Molvi Yunus, a 39-year-old, is one of the several thousand Rohingya Muslims living in Jammu since 2008. According to one estimate, nearly 20,000 Rohingya and over 50,000 Bangladeshi Muslims have been illegally living in Jammu and Jammu’s border district of Samba, which have witnessed several terrorist attacks during the past few years.

As per the official figures placed on the floor of the Assembly last year, “there were 13,433 Rohingya and Tibetan Muslims living in Jammu & Kashmir”. These included 7,690 Tibetans and 5,743 Rohingyas. Not one Rohingya Muslim has been able to settle in Kashmir because the Kashmiri Muslims oppose their settlement in the Valley.

What Molvi Yunus said is a proof that causes of the settlement of Rohingya Muslims in Jammu are deeper. They are getting support from the state government, a Kashmir-based fraternity of lawyers and several NGOs. Some of the NGOs, which are supporting them and working for them include Sakhawat, run by Muhammad-ul-Umar of Srinagar (Kashmir); SR Institute of Development, Srinagar; a Delhi-based NGO, namely DAJI, which is run by Ravi Hemadri; and Save the Children, run by Neha Gandotra.

Terrorist organisations like Hizbul Mujahideen are also standing solidly behind them and they have warned the people of Jammu that they would be taught a lesson if they harassed them. Jammu & Kashmir Chief Minister Mehbooba Mufti has turned down the demand of her coalition partner, BJP, and said the “deportation of Rohingyas from Jammu will not be appropriate”. And she made this statement on the floor of the Assembly and defended then, saying they were not involved in any subversive activity.

The nature of official support to the Rohingya Muslims settled and are being settled in Jammu could be gauged from four facts.

One, some of the Rohingya Muslims have been settled in the strategic hilly and forest areas across Jammu’s River Tawi. Leave aside over three dozen localities in and around Jammu where they have been residing since years now. Some of these localities include Bathindi, Narwal, Talab Tillo, Bhagwati Nagar, Vidhata Nagar, Rehari and Belicharana.

Two, they have set up a market in the Narwal area and it is called “Burmese Market”.

Not only some political parties and socio-religious groups plus the JCCI and JKHCBAJ, intelligence agencies too have expressed the view that the presence of the Rohingya and Bangladeshi Muslims in Jammu poses a threat to the national security…

Three, there are some government schools where the presence of Rohingya and Bangladeshi students is “over 80 per cent”. Government Middle School, Narwal Bala, is one such school. And it was none other than BJP MLC Bikram Randhawa who made this claim after visiting this school and verifying the school records. The rule is: no non-state subject can get admission in any government school anywhere in the state. Girl students are getting education free of cost, as they have been covered under the Union Government’s “Beti Bachao Beti Padhao” Scheme. The state government has placed at the disposal of the Rohingya Muslims at least 24 teachers and they are getting their salary from the government.

There are reports that some Rohingya and Bangladeshi Muslims are using forged affidavits to get their children admitted in government schools. One report in this regard reads like this: In-depth investigation carried out reveals that in order to ensure admission of these Rohingya children, their sympathisers have forged their affidavits and had even submitted their outdated refugee certificates”.

It’s no wonder then that several political, social and religious groups and such organisations as Jammu Chamber of Commerce and Industry (JCCI)and Jammu & Kashmir High Court Bar Association, Jammu (JKHCBAJ) have expressed serious concern over the illegal settlement of the Rohingya and Bangladeshi Muslims in Jammu, which is strategically very vital. They have all in one voice said that their illegal settlement has not only posed a grave threat to national security but they were settled and are being settled to change Jammu’s Hindu-majority character and convert Jammu, the winter capital of the state, into Kashmir. They have also been invoking Article 370 to make their point and persuade the state government to evict them, saying no non-state subject can enjoy the facilities, privileges and rights which are available to the Permanent Residents of Jammu & Kashmir under Article 370 and under Article 35-A of the Indian Constitution. “Abrogate Article 370 or implement it in full,” has been their refrain, which is very valid considering the constitutional status of Jammu & Kashmir.

Not only some political parties and socio-religious groups plus the JCCI and JKHCBAJ, intelligence agencies too have expressed the view that the presence of the Rohingya and Bangladeshi Muslims in Jammu poses a threat to the national security and that some of them are involved in criminal activities and Narcotic trafficking.

It is baffling that while Buddhist Myanmar and Muslim Bangladesh have refused to accept the Rohingyas taking into consideration security concerns and Muslim Saudi Arabia has ordered all the 12,000 illegal Bangladeshis to quit the country within 90 days, New Delhi has not found it desirable to deport these illegal immigrants from Jammu. It would be only desirable if the authorities in New Delhi take up this issue on a priority issue and order their eviction before it is too late. The nation can’t afford Kashmir-like situation in Jammu for obvious reasons. Suffice to say that if Jammu Turns Muslim-majority, the results for the already-under-attack Indian nation would be disastrous. 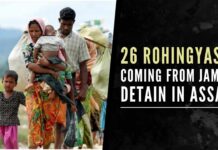 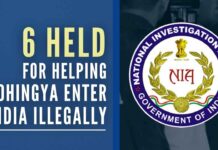 Money in Tax Havens – You can run but you cannot...