[dropcap color=”#008040″ boxed=”yes” boxed_radius=”8px” class=”” id=””]T[/dropcap]he BJP-PDP alliance government headed by Mehbooba Mufti have, apparently, succumbed to the diktats issued by the separatist leaders in Kashmir valley over the issue of handing over ‘Domicile certificates’ to the deprived population of West Pakistan Refugees (WPR) settled in the state in the aftermath of partition of 1947.

These refugees do not even enjoy the right to vote in the State Assembly elections but exercise their right to franchise in Parliamentary polls.

As per official records more than 19,000 families of WPR are settled in the state and struggling to earn citizenship rights.

These refugees do not even enjoy the right to vote in the State Assembly elections but exercise their right to franchise in Parliamentary polls. In the absence of state subjects they cannot appear for state government jobs and other examinations.

The successive state and central governments had promised to grant them the citizenship rights but so far they were deprived of the same under pressure from the kashmir based political parties.

More than 19000 WPR families registered with the J&K Govt.

Gandhi said despite being living in State since 1947, the refugees have not been granted the J&K citizenship. “It is a humanitarian issue and state government should issue us citizenship as we are the citizens of India and living in state for six decades,” he said.

In March 2015 when the BJP-PDP formed first ever alliance government in the state even they had decided to
take measures for sustenance and livelihood of the West Pakistan refugees.

On November 30, 2016 a Rs.2,000 crores ($295 million) development package for displaced people of Pakistan occupied Kashmir (PoK) living in the country was approved by the Union government.

Under the package a financial aid to 36,384 families, who are mostly living in Jammu region after their displacement from PoK after Independence was approved by the Union Government.

After the announcement was made West Pakistan Refugees (WPR) had once again raised the issue of their permanent settlement.

Earlier a delegation of WPR had even called on Union Home Minister Rajnath Singh in New Delhi to present their charter of demands including citizenship rights.

Responding to the genuine demands of these refugee leaders the Union government had instructed the state government of Jammu and Kashmir to authorize Naib-Tehsildars to issue domicile certificates to the West Pakistan Refugees.

The certificates issued by the state government clearly mentions that the person is a West Pakistan refugee, who has been living in J&K after the partition but is not a resident of the State.

These certificates have been issued so that they can get jobs in central government and central forces.

Sensing trouble behind the move separatists leaders in Kashmir valley objected to the reported move by the Jammu and Kashmir government to give domicile certificates to West Pakistan refugees. They claimed it was an attempt to change the demography of the state.

The separatist leaders even targeted the ruling PDP over the issue and called for statewide protests and demonstrations on Friday.

[dropcap color=”#008040″ boxed=”yes” boxed_radius=”8px” class=”” id=””]O[/dropcap]n Thursday the state government issued a fresh clarification claiming, “an orchestrated and misleading campaign has been launched to create an impression that the Government is changing the status of the WPR and they are being provided domicile certificates”.

He said as the West Pakistan Refugees can’t apply for any job within the State, because of being non-state subjects…

Minister for Education and State Government Spokesman Naeem Akhtar in a statement said, “the refugees who settled in Jammu and Kashmir, in the aftermath of the partition of the subcontinent, include those from PoK and West Pakistan”. “While the refugees from PoK have the status of the permanent residents of the State, those from West Pakistan are not entitled to permanent residence as they are not the domiciles of Jammu and Kashmir,” he said and added that given their present status, the West Pakistan Refugees are entitled to vote in the Parliament elections, but can’t exercise their franchise in the state assembly polls.

He said as the West Pakistan Refugees can’t apply for any job within the State, because of being non-state subjects, to facilitate them to get jobs in paramilitary forces and other central government establishments, the Government has issued them Identity Certificates which is in the same format as exists in the voter list for the Parliamentary polls. “Issuance of Identity Certificates does in no way change the status of the West Pakistan Refugees and they continue to be the non-state subjects,” he said.

Akhtar said, unfortunately, earlier this year also controversies were stirred and public passions raised deliberately on tenuous issues like Pandit Colonies and Ex-Servicemen Colonies which ended up with a long spell of disorder and violence in Kashmir resulting in loss of so many precious lives, injuries, destruction of public and private properties, breakdown of academic system, torching of schools, ruining of economy and complete halting of developmental process.

“Now when the situation has started improving in Kashmir with academic, tourism, developmental and economic activities slowly picking up again, unfortunately speculative reports are being passed around about the change of status of the WPR to create confusion and once again fuel disquiet,” he said and urged the people to not to give credence to such unsubstantiated and disingenuous reports.
Note:
1. The conversion rate used in this article is 1 USD = 67.84 Rupees.
2. Text in Blue points to additional data on the topic.
3. The views expressed here are those of the author and do not necessarily represent or reflect the views of PGurus. 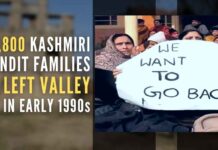 Is Dilwale Dulhaniya Le Jayenge being enacted in Karnataka?