The Pandora’s Box of shoddy defence deals in India by the London-based blacklisted Vectra Group promoted by Ravi Rishi and fugitive Sanjay Bhandari has come out in the open. PGurus reported a few weeks back on the Vectra Group being caught in the Tatra Trucks scam and trying to bribe the then Army Chief General (Retired) Vijay Kumar Singh to bag an offset contract through a shell firm in Indian Navy’s Rs.1800 crores-worth submarine rescue supply[1]. Now we have found that this controversial blacklisted group has been caught for bribing using around five shell companies to bag contracts in India.

Our London-based researchers have found that Vectra Group is using several shell firms to bag contracts in Defence, Home Ministry and Oil sectors in India to bag offset and other contracts. Many firms linked with the controversial Vectra Group are now controlled by blacklisted accused Ravinder Kumar Rishi’s (known as Ravi Rishi) wife and daughters. Ravi Rishi passed away in mid-2016. These shell firms are engaged in offset contracts, servicing contracts in the Defence Ministry and Helicopter related services with Oil and Natural Gas Corporation (ONGC) and other strategic areas.

The Vectra Group and its promoters and their allied firms were blacklisted after General V K Singh exposed the illegalities and briberies in the Tatra Trucks purchases. Recently a trial court has framed charges against the bribe offeror Lt. General(Retired) Tajinder Singh. In August 2014, after Defence Ministry’s pressure, the Central Bureau of Investigation (CBI) was forced to file a closure report in the decades’ long Tatra Trucks purchases through Ravi Rishi’s firms. The Defence Minister at that time was Arun Jaitley. It is known to all that Jaitley and Rishi were neighbours in Kailash Colony. Jaitley’s home address is A-44 and Ravi Rishi’s is A-54 in Kailash Colony. Anyway, both are not here now.

But the court has not yet approved CBI’s closure report. However, illegally, due to the pressures, some Government departments are allowing blacklisted Vectra Group’s shell firms to bid through the back door. In the last hearing, on September 6, 2019, the court asked CBI to produce the records of Tatra Trucks purchase for the past two decades. The next hearing is on October 17, 2019. It is a big question as to why the CBI decided to close a case during BJP regime which was exposed by its own Union Minister, Gen. (Retd.) V K Singh, when he was the Army Chief in 2011.

Our London-based researchers have accessed a series of communications between Ravi Rishi-promoted Vectra Group and many Indian politicians, bureaucrats and journalists. Many enjoyed London hospitality with this Group, which milked defence deals between old Communist countries and India. Some bureaucrats’ close family members are running the firms promoted by Ravi Rishi. The former Home Minister P Chidambaram (that man again!) even ignored Intelligence Bureau’s alerts and provided security clearance to Ravi Rishi-floated helicopter services. 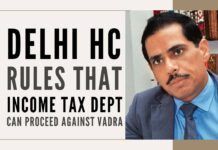