For them, the land across the border once seemed to be the hope for a better life. But once they crossed over and got caught for crimes, their timeline was frozen in the confines of Indian juvenile homes.
Milton, Sattar and hundreds of other Bangladeshi teens had crossed over to the Indian side from Bangladesh for a better life, but they had run-ins with the law enforces in India and finally landed up in juvenile homes of Tripura, India’s northeastern state that shares a long border with Bangladesh.
Now a bleak and uncertain future stares at them as they wait to go back home and battle it out there.
“After my mother’s (Payara Bibi) death seven years ago, my stepmother started behaving ruthlessly with me. My father is a rickshaw puller, he is unable to feed us properly too. We are eleven brothers and sisters,” 14-years-old Milton Mia (changed name) told IANS at the Narsingarh juvenile home.
Milton said: “One day I along with two other friends ‘mistakenly’ crossed over to India. A few days later, I along with others had stolen some goods from a house in Agartala. Police then detained me.”
On October 28 last year, Tripura police detained Milton on charges of burglary and violation of the Indian Passport Act. He was produced in a local court, which sent him to the government-run Narsingarh juvenile home, 20 km north of here, as he is a minor.
After taking mandatory written permission from the Tripura government’s social welfare department, this IANS correspondent talked to the children lodged in the Narsingarh home, where 14 children convicted for various crimes, are lodged.
“I am keen to return to my home at Sasankacha (under Kotwali police station) in Comilla district (eastern Bangladesh). Though everyone here loves me, I do not want to stay here (at the juvenile home),” said Milton, who’s parents shockingly never enquired about him.
Another Bangladeshi teenager, Monirule (changed name) echoed Milton.
“My mother, Silpi Begum, died of blood cancer in 2005. Since my father drove a small van, his small earnings were not enough to treat my mother well. We are four brothers and sisters,” Monirule, a student of class six in a Bangladeshi school, told IANS.
Monirule hails from Durgapur, a village adjacent to Milton’s Sasankacha village in Comilla district. Bangladesh’s Comilla city is walking distance from western Tripura’s Sonamura sub-division.
Of Tripura’s 1,018 km outer periphery, 84 percent (856 km) is the international border with Bangladesh. In the domestic sector, Tripura has a 109-km border with Mizoram and 53 km with Assam. A large part of the border is unfenced and riverine.
A large number of Bangladeshi women, children, youths and middle-aged men cross over to Tripura and engage themselves in various work, including as rickshaw pullers.
Small children and teenaged boys mostly work as rag pickers and collect scraps of various goods, waste material and used and old items from the garbage on the roadsides and from houses and sell them in local markets.
Tripura Police’s Mobile Task Force (MTF) either instantly or after the conviction period handed down by the courts, hands over the illegal infiltrators to Border Guard Bangladesh (BGB) through India’s Border Security Force (BSF).
According to Tripura Police records, over 191,200 infiltrators, including women and children, have been pushed back to Bangladesh during the past 41 years (up to September).
“The BGB officials officially or unofficially never admit about their citizens who illegally cross over to India and become involved in various offences in bordering states,” MTF chief L. Darlong told IANS.
“As per the Tripura government and union home ministry’s advisories and orders, we are pushing back the foreign nationals either after completion of their conviction or instantly after they are apprehended. Though the push back process is done through BSF, the BGB never officially admit or accept their nationals,” he added.
“In most cases, we try to overlook the presence of Bangladeshi children in our state. We just detain them and push them back to their country. When these children committed crimes, we had to detain them and produce in court under the juvenile act,” the MTF head said.
According to Fulan Bhattacharjee, social activist, writer and councilor of the Agartala Municipal Corporation, involvement of children, specially Bangladeshi teens in crimes, trafficking, smuggling and other nefarious activities is a very complex problem of the northeastern states, which share a 5,437-km international boundary with China, Myanmar, Bhutan, Bangladesh and Nepal. Most parts of the border are unfenced, terrain-crammed and porous.
“Association of children, specially Bangladeshi boys and girls, is not only a multi-faceted problem but the issues in most cases generate from their families’ chaotic and complex predicaments,” Bhattacharjee told IANS.
Tripura High Court Chief Justice Deepak Gupta recently visited the Narsingarh juvenile home and asked the authorities to deport or push back the Bangladeshi children through the country’s diplomatic mission in India.
“The Juvenile Justice (Care and Protection of Children) Act 2000 specifies that the children of other nations should be deported or pushed back through the respective country’s diplomatic mission in India,” legal expert Biduit Datta told IANS.
Datta, who is associated with the juvenile home as a lawyer, said: “Though deportation or push back of children to their respective countries is a time-consuming affair, this will help the children secure their future.” 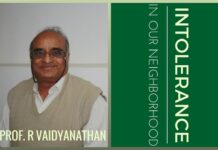 A non-press briefing that achieved nothing