[dropcap color=”#008040″ boxed=”yes” boxed_radius=”8px” class=”” id=””]K[/dropcap]erala’s Sports Minister and the Communist Party of India (Marxist) – CPI(M)’s Central Committee Member EP Jayarajan created a flutter on Saturday morning by offering his tributes in TV channels to the death of iconic boxer Muhammad Ali. Jayarajan’s image in party as a strong man and able administrator probably has taken a bit of hit on his faux pas.

Jayarajan literally surprised the TV anchor. When asked to offer his tributes as Sports Minister live over phone, Jayarajan started: “Now only I come to know that Muhammad Ali passed away in America. He was a most valued player of Kerala. Muhammad Ali made Kerala proud by winning Gold Medals in Sports and put the name of Kerala in world forums..”

[dropcap color=”#008040″ boxed=”yes” boxed_radius=”8px” class=”” id=””]H[/dropcap]earing this the TV anchor was stunned and stopped his live conversation. Saturday morning onwards social media went viral with this video. People started joking that if the anchor had not disconnected the conversation, Jayarajan would have offered all help of the state to bring back the body of Muhammed Ali from America and he would even offer government job to the Ali’s wife or kids as mark of respect by the Kerala state.

Jayarajan is CPI(M)’s Central Committee for the past eight years. How did CPI(M), which trains its cadre at every stage, catapult him to the highest party forum? Jayarajan is known as an able administrator and an expert in financial affairs of the party. He successfully converted party’s newspaper Deshabhimani and TV Channel ‘Kairali’ to profitability. Jayarajan is known as a good orator and has been offering his views on everything under the sun in public forums.

Moreover in Kerala, CPI(M) organs published hundreds of articles for the past three decades terming Muhammad Ali as a fighter against US imperialism when he opposed Vietnam war and objected to participate in war. CPI(M) organs in Kerala had translated Ali’s letter in 1966 to the US administration about his objection to the Vietnam war.

How Jayarajan, who served as Publisher of CPI(M) organ Deshabhimani is not aware of this historical facts, is a mystery. Jayarajan’s lack of general knowledge (which is how this will perhaps get played out) is going to haunt him and his party who elevated him to the highest decision making forum – the Central Secretariat.
Note:
1. Text in Blue points to additional data on the topic. 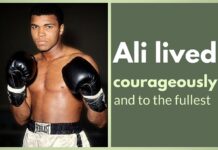