Which of the two stalwarts will lead the CPI-M-led bloc in the upcoming Kerala assembly elections? Former chief minister V.S. Achuthanandan or party strongman Pinarayi Vijayan?

With elections expected in April or May, it is a question millions are asking across Kerala now, both within the Left Democratic Front (LDF) that the CPI-M leads and outside.

Going by the past one decade of political events, there is no doubt that the 92-year-old Achuthanandan is perhaps the biggest crowd puller in Kerala.

But those who know the organisational abilities and strengths of 71-year-old Vijayan and the way he handled the power ministry in the 1990s say he is firmly in the race.

The two men are known to be at loggerheads within the CPI-M in Kerala, now the only state in the country besides Tripura where the Marxists have a chance to taste power again.

Sitaram Yechury, general secretary of the Communist Party of India-Marxist (CPI-M), has a stock answer: “Ours is not a bourgeois party which names its leader ahead of elections.”

But that has not contained the wagging tongues on who may be the chief ministerial candidate of the LDF when it takes on the Congress-led United Democratic Front (UDF).

As things stand now, Vijayan appears to have edged out Achuthanandan.

[dropcap color=”#008040″ boxed=”yes” boxed_radius=”8px” class=”” id=””]H[/dropcap]e is leading his party’s statewide ‘yatra’ from the northern district of Kasaragod. It will pass through all the 140 assembly constituencies in Kerala before ending in this state capital next month.

Ahead of the yatra, he took centrestage at the two-day meeting here which worked out a blueprint of the programmes and policies to be pursued if the Left returns to power after a gap of five years.

Asked if Kerala would prefer a 90-plus or someone in the 70s, Vijayan retorted: “We are a party which has capable leaders from 25 to 95.”

While Vijayan is miles ahead of Achuthanandan in terms of popularity within the CPI-M, party sources say, the latter enjoys the support of Left allies.

Asked to choose between a 92-year-old and a 71-year-old, CPI state secretary Kanam Rajendran said: “What if the 90-plus has over 50 years of solid experience?”

Former CPI-M general secretary Prakash Karat has said there will be no confusion over Achuthanandan’s status unlike in 2006 and 2011.

[dropcap color=”#008040″ boxed=”yes” boxed_radius=”8px” class=”” id=””]O[/dropcap]n both occasions, the party decided not to field Achuthanandan in assembly elections. But it made a U-turn following public outcry. He went on to become the chief minister in 2006.

Five years later, in 2011, he became Leader of Opposition, a post he currently holds.

CPI-M leaders say they won’t let any development dent the Left’s image on the leadership question.

According to one insider, Vijayan may be asked to lead the state and Achuthanandan will be re-inducted into the party politburo and elected to the Rajya Sabha when three seats fall vacant in April. 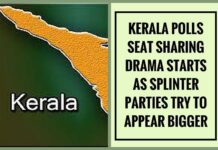