[dropcap color=”#008040″ boxed=”yes” boxed_radius=”8px” class=”” id=””]E[/dropcap]ven an obituary can become a tool in the hands of liberals to glorify Islam and slam America and Christianity. This is what has happened after heavyweight champion boxer Muhammad Ali’s demise.

If somebody from Mars had landed on earth after June 3, he would have gathered that the wickedest nation in the world is the United States, the only country which practiced slavery even after four decades of becoming a republic devoted to life, liberty, and the pursuit of happiness; that even after a century after the abolition of slavery, blacks were discriminated against in the US; that racism and iniquity exist only in that country. The US, the Martian would get the impression, are so vile and depraved that they even persecute their greatest sportsmen on grounds of racism.

Further, the Martian may get the impression that Christianity is based on and promote inequality, while Islam is its antithesis. The wretched of the earth have to give up Christianity and embrace Islam to gain equality and dignity. This was, after all, the background of Cassius Marcellus Clay, who had to become a Muslim and be called Muhammad Ali. As he himself said, “Cassius Clay is a slave name. I didn’t choose it, and I didn’t want it. I am Muhammad Ali, a free name—it means beloved of God—and I insist people use it when speaking to me and of me.” In short, Islam is the Great Emancipator. Q.E.D.

[dropcap color=”#008040″ boxed=”yes” boxed_radius=”8px” class=”” id=””]W[/dropcap]hat the media, however, does not tell is the fact that Cassius Clay was anything but a “slave name.” Herman Heaton Clay, a descendant of African-American slaves, wanted to honor a prominent American crusader against slavery, Cassius Marcellus Clay, so he named his son after the abolitionist.

Further, embracing Islam is certainly not a statement made in favor of equality; in fact, it is the opposite. For Islam—or at least as it is practiced—is very clear about the status of women in the community: it is subservient to man. Thus the Koran offers such pearls of wisdom:

[dropcap color=”#008040″ boxed=”yes” boxed_radius=”8px” class=”” id=””]F[/dropcap]urther, the Koranic wisdom is that women are not only inferior to men, they ought to be disciplined and beaten: “Men are the maintainers of women because Allah has made some of them to excel others and because they spend out of their property; the good women are therefore obedient, guarding the unseen as Allah has guarded; and (as to) those on whose part you fear desertion, admonish them, and leave them alone in the sleeping-places and beat them…” (4:34). “And take in your hand a green branch and beat her with it, and do not break your oath…” (38:44).

The Koran also supports slavery and sex slavery, which explains why the ISIS, inarguably the most state in modern history, is capturing and exploiting Yazidi and Christian women.

This also explains the egregious role the Arabs have played in promoting slavery all over the world, including the enslavement of Africans: you don’t feel pangs of guilt for an action that is religiously sanctioned. Leftists and liberals remain focused on the Atlantic slave trade and the plight of African slaves in the early modern period, almost completely airbrushing the Arab culpability in the evil.

Muhammad Ali and other radical black Americans who saw equality and emancipation must have been terribly deluded: they sought redemption in the religion that had been the scourge for millions of their brethren. In the case of Ali, the irony was doubled because he repudiated a name that figures prominently in the history of abolitionism.

This was the reason that Martin Luther King admonished him.

[dropcap color=”#008040″ boxed=”yes” boxed_radius=”8px” class=”” id=””]A[/dropcap]li’s anti-Vietnam War rhetoric, reminisced so fondly, also didn’t make much sense. “I got nothing against no Viet Cong. No Vietnamese ever called me a nigger.” Well, this logic can be used by anybody unwilling to fight for his country. It is unlikely that any Chinese soldier was against any Indian soldier in 1962—or, for that matter, now.

Ali’s pre-Parkinson delusions, however, do not diminish him, either as a boxer or as a rebel against injustice. Indeed he was the greatest boxer in his time. He knew that and said that: “I am the greatest, I said that even before I knew I was. I figured that if I said it enough, I would convince the world that I really was the greatest.”

Muhammad Ali lived his life courageously: “he who is not courageous enough to take risks will accomplish nothing in life.” And to the fullest. He should be remembered as such.

Muhammad Ali should not be allowed to be appropriated by the jihad-friendly liberals who are hell-bent in guilt-mongering and glorification of Islam. 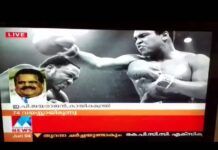