According to CelebrityNetWorth.com, Gaddafi was able to build his massive personal wealth thanks to a violent and domineering control over Libya’s natural resources. Libya has the largest supply of oil in Africa and the tenth largest in the world. Gaddafi used Libya’s oil to print money for 40 years! During that time he spread his money around the globe through family members, Swiss bank accounts, real estate and investments. Estimated at $200 billion, he had enough to give $30,000 to each of Libya’s 6.6 million citizens.

At the beginning of the Libyan conflict, authorities discovered and seized roughly $67 billion of Gaddafi’s wealth hidden in bank accounts around the globe. England, France, Italy and Germany seized another $30 billion and the Obama administration found a staggering $37 billion in the United States. Investigators suspect that Gaddafi hid an additional $30 billion around the world. It is believed that Gaddafi had billions of dollars worth of gold hidden in Libya, which has yet to be discovered. Others claimed that they found $12.5 billion of Gaddafi’s cash sitting on pallets in a Johannesburg airplane hangar a few years ago. The following graphic shows where the $200 billion fortune maybe located. Hover over the pie chart for more details.

Following the start of Arab Spring in 2011, Gaddafi spoke in favor of Tunisian President Zine El Abidine Ben Ali, then threatened by the Tunisian Revolution. He suggested that the Tunisia would be fine if President Ali introduced a Jamahiriyah (meaning a country of the people – loosely translated to socialism) system there. As Tunisia was falling, he tried to shore up his popularity by reducing food prices, releasing several Islamist prisoners and purging the army leadership of possible defectors. But this did not prevent people from protesting in the streets and he ordered an army crackdown in Benghazi where hundreds of protesters died.

This triggered a wave of protests and several senior politicians resigned or defected to the protestors’ side. The uprising spread quickly through Libya’s less economically developed eastern half. By the end of February 2011, eastern cities like Benghazi, Misrata, al-Bayda and Tobruk were controlled by rebels, and the Benghazi-based National Transitional Council (NTC) was founded to represent them. The NTC was recognized by the Arab League on August 25, bestowing it as the legitimate entity in control in Libya. Gaddafi died on October 20, 2011 in battle and was given a quick burial in an unidentified location in the desert.

When Gaddafi fell, Libya had a relatively well educated population of about 6 million. Libya was pumping 1.3-1.5 million barrels a day and had approximately $100 billion in foreign reserves, mostly money collected from selling Oil. The NTC could have built a prosperous Libya from there but something interesting happened. The NTC decided to give $2,400 from the national treasury to every family, which totaled close to $20 billion. Anyone who claimed that he/ she fought against Gaddafi was also rewarded. With the army and police disbanded/ discredited, many of the revolutionaries banded together as militias and started fighting each other for territory and for cash payouts.

By 2014, warring militias had destroyed large sections of Tripoli’s international airport with mortars, shoulder-launched missiles, rockets, and tanks. Libya’s Oil production has declined to 300,000 barrels a day and about half-a-dozen prominent Libyans who opposed Gaddafi had been murdered. Seeing that there was no real authority in power in Libya, the United States, UK and others have withheld returning Gaddafi’s billions.

Almost 95% of Gaddafi’s wealth is still with US, UK and other countries, waiting to be claimed

The Libyan Investment Authority (LIA), estimated to be around $60 billion were taken over by the Central Bank of Libya in April 2013. The portfolio was managed by Goldman Sachs and Societe Generale (among others). What is baffling is that the investment money did not grow between 2006 – 2013, a seven year period in which other investments doubled or even quadrupled! Now the LIA has sued Goldman alleging them of “deliberately exploiting” the relationship for their own gain. This case is being fought out in a High Court in London.

It’s hard for the West (or the East) to understand the full scope of the disaster that’s befallen Libya. It’s happened, in part, because no one in or outside Libya bothered to figure out what the country might really look like after the dictator was gone. “Even after Afghanistan and Iraq, no one seems to have thought seriously about what would happen afterward,” says al-Ghwell, the World Bank economist. Al-Ghwell, one of the world’s leading experts on the development of North African economies, says Libya is well along the road to becoming something new: the world’s first failed petro state. “You can imagine Somali rebels and pirates with money to burn,” he says when asked why the collapse of Libya should bother anyone besides the Libyans. Since the fall of Gaddafi, at least 5 Prime Ministers (PM) have come and gone in Libya.

One of the former PMs of Libya, Ali Zeidan, who lives in exile in Munich now says that a UN Peacekeeping force along with forces from Arab League are needed to drive militias off the streets and restore order. He also added that Libya is a long way from becoming a democracy as most parliamentarians are still to understand what their duties are, what it takes to be a country, a culture, and a nation.

The United Nations continues to try and graft a fabric on Libya, called the General National Assembly (GNA) headed by Fayez al-Sarraj, a Libyan of no particular political note. Sarraj needs to rein in the Islamic militia-led government in Tripoli and also contain ISIS, which is in control in some pockets (especially Sirte, Gaddafi’s hometown).

Almost 95% of Gaddafi’s wealth is still with US, UK and other countries, waiting to be claimed. And that is good for the long-suffering people of Libya. If only they can get a stable governing body!

Click here for the next part in #BringBackBillions How should India proceed to get back billions from Tax Havens – Part 8
Note:
1. Text in Blue points to additional data on the topic. 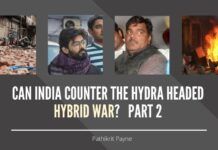