On December 14, members of the Gupkar gang, including its head Farooq Abdullah, number two Mehbooba Mufti, M Y Tarigami, and Muzzaffar Shah, met at their headquarters (Farooq Abdullah’s Gupkar Road residence, Srinagar), sung the same old irritating and divisive special status song like Jinnah used to sing the Pakistani song, discussed their political future vis-à-vis India, abused the Modi Government and resolved to “reach out to Jammu to take its people on board for the anti-India and pro-Article 370 and pro-Article 35A” campaign.

“As far as we are concerned, including PAGD and other constituents, there is a strong feeling that there will be no forward movement without representation from Jammu, or without any credible dialogue with the cross-section of people including civil society in Jammu,’’ said the spokesperson of the gang CPI(M) leader M Y Tarigami after the meeting.  Further, he said, “Kashmir cannot march ahead without Jammu and likewise Jammu too can’t ignore Kashmir and Ladakh. We have to move together over the issue as this is for us an article of faith…We have to identify the areas where we can agree and we have every right to disagree as well. We must explore those possibilities where there is some sort of commonalities which can be abiding force for all of us to move together so that some relief is provided to the people of Jammu as well as Kashmir’’.

They did come to Jammu on December 21, a day after the new Delimitation Commission shared its 47-seats-for-Kashmir and 43-seats-for-Jammu proposal with all the five associate members (Lok Sabha MPs), including MoS in PMO Jitendra Singh and Jugal Kishore Sharma (BJP) and Farooq Abdullah, M A Lone and Hasnain Masoodi (NC). All the Gupkaris were seething with anger.

What did they do in Jammu?

They dismissed with contempt the Justice (retired) Ranjana Prakash Desai-headed Delimitation Commission’s proposal. They denounced it as biased, unfair, and anti-Kashmiri Muslim. They abused the Narendra Modi Government and accused it of hatching a conspiracy after a conspiracy against Kashmiri Muslims calculated to “dis-empowering” them and installing a Hindu from Jammu as CM of the “Muslim-majority State”. They charged the Modi Government with subverting the concept of federalism, Gupkar-type, nay Jinnah-type. They used all kinds of invectives and epithets against the RSS and the BJP and described them as the biggest enemies of Kashmiri and other Muslims. They pitted the non-existent Paharis in the Rajouri-Poonch belt in Jammu and the Baramulla-Kupwara belt in Kashmir against the Scheduled Tribes, including Gujjars and Bakarwals (Muslims) and Gadis (Hindus). They sought to put the Pathowari-speaking people in these areas on a warpath by telling them that the Delimitation Commission had ignored them and not considered their claim and proposed nine seats (10%) exclusively for the STs in the 90-member House. They made it loud and clear that they will accept the Delimitation Commission’s report only if it was based on the 2011 (fudged) census figures and that they will approach the Supreme Court of India against Delimitation Commission’s proposals if it failed to consider, accommodate and appreciate their stand on delimitation in J&K. (Under the law, the recommendations of Delimitation Commission can’t be challenged in any court of law.) What these Gupkaris said was self-explanatory and, hence, requires no further elucidation.

But the uncouth, uncivilized, undemocratic, insensitive, provocative and essentially separatist and divisive Gupkaris didn’t just stop here. They went several steps further and announced in Jammu itself that they will hold a demonstration in Srinagar on January 1, 2022, against the Delimitation Commission and the Modi Government, which proposed to increase the number of seats for Jammu from 37 to 43 and for Kashmir from 46 to 47. The JK Apni Party of Altaf Bukhari also decided to pursue the Gupkaris’ line. It announced a protest in Srinagar against the Delimitation proposal on December 29.

What exactly did the Gupkaris and the Bukharis tell to the people of Jammu province, including Hindus, Muslims, Sikhs, and Jains and about 1.5 million Hindu-Sikh refugees from Pakistan, PoJK, and Kashmir itself, all victims of jihad? They in a most shameless manner told them that the CM of J&K always was a Muslim from Kashmir and this top executive office was the sole preserve of Kashmir; that the people of Jammu province have to groan under the Kashmiri yoke; that they consider their followers and cadres in Jammu province as their slaves; and that they and Kashmir were the only two factors in the UT of J&K, which the Modi Government must recognize.

And, what they said in Jammu must be taken by the people of the marginalized, ignored, discriminated against and enslaved people of Jammu province to mean a blessing in disguise. Indeed, the December 29 Bukharis’ protest and January 1, 2022, Gupkaris’ protest in Srinagar against Delimitation Commission’s proposal will be a game-changer. It will not only add fuel to the fire in Jammu province but will also hasten the process of separation of Jammu province from Kashmir. As a matter of fact, the December 29 and January 1, 2022, anti-Jammu events in Srinagar will convince the Narendra Modi Government that Jammu province and Kashmir could not live together.

The whole point is that Jammu province is destined to be separated from Kashmir, as it happened in the case of Ladakh on August 5-6, 2019. The whole point is that the Gupkaris through their divisive words and deeds motivated and forced the Modi Government to scrap the seditious Article 370 and discriminatory and illegal Article 35A, create UT of Ladakh out of the J&K State, convert the remaining state also into a UT and end the 149-year-old practice of Darbar move – a practice which only helped them to loot and plunder Jammu and change its demography and destroy Jammu socially, culturally, economically and politically. The whole point is that what the Gupkaris’ said in Jammu on December 21 and the Bukharis said in Srinagar on December 23 and their Srinagar protests against Jammu will further motivate and force the Modi Government to de-link Jammu from Kashmir and confer on it either full state status or UT status.

All in all, it can be said that things are moving in the right direction as far as Jammu province is concerned. 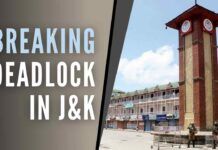