With former Finance Minister P Chidambaram’s advocates claiming that there were no records of him and Approver Indrani Mukerjea meeting, CBI on Friday told the Delhi High Court that Chidambaram had tampered with the visitors’ logbook in Finance Ministry. Objecting Chidambaram’s bail petition, Solicitor General Tushar Mehta said that the agency got Hotel Oberoi’s tax records that Indrani and her husband visited Chidambaram at Finance Ministry. However, Mehta did not disclose when the tampering of visitors’ logbook happened. Justice Suresh Kait reserved order on the bail plea of Chidambaram, now jailed in the INX Media corruption case.

Meanwhile, the Government has issued sanction to the Central Bureau of Investigation (CBI) to prosecute former NITI Aayog CEO Sindhushree Khullar and three officers in connection with the Foreign Investment Promotion Board (FIPB) clearance granted to INX Media. Other officers are former Secretary of the Ministry of Micro, Small and Medium Enterprises Anup K Pujari, the then director in the Finance Ministry Prabodh Saxena, and former under-secretary in the Department of Economic Affairs Rabindra Prasad. The government had already sanctioned the prosecution of Chidambaram in February this year, the officials said.

Khullar served as additional secretary in the Department of Economic Affairs during 2004 and 2008. Pujari was the joint secretary during 2006 and 2010; Saxena served as the director of the department between 2008 and 2010, and Prasad also worked during the period under investigation, they said.

Opposing Kapil Sibal and Abhishek Singhvi’s argument, Mehta said that Chidambaram is a very influential person and the agencies have found that he had tampered with the visitors’ logbook in Finance Ministry to sabotage the records of his meetings with approver Indrani and her husband. Mehta was responding to Sibal’s arguments that Indrani never met Chidambaram and there were no records in the visitors’ logbook. According to Indrani, she met Chidambaram in 2008 after she received prosecution notice from Income Tax for illegally bringing Rs.305 crores as FDI, while had only approval for Rs.5 crores.  Mehta reiterated that Chidambaram should not be granted bail citing his non-cooperation with agencies.

The question that needs to be asked here is the timeline of the tampering of visitors’ logbook of Finance Ministry. When did this happen? The meeting took place in 2008 and Chidambaram was caught in the INX Media bribe case only in March 2017. It is a billion-dollar question as to who helped him to tamper with the logbook.

At present, the trial court has put Chidambaram in judicial custody till October 3 and his release from Tihar jail will be decided after the Delhi High Court’s order, which is reserved on Friday. 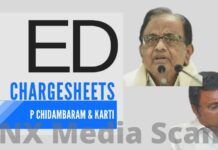 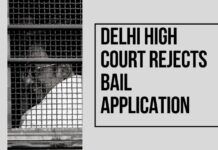 Has the end game begun for Finance Secretary Hasmukh Adhia?