Certain sensitive documents will come out in the public domain after a long time. After 20 years, PGurus accessed the Central Bureau of Investigation’s (CBI) closure report on the two decade old Indian Space Research Organisation (ISRO) spy case. The 32-page report published in the end of this post lays the blame squarely at the Intelligence Bureau (IB) officials and top Kerala Police officers for spoiling the career and fame of ISRO’s top scientists like Nambi Narayanan and D. Sasikumar.

Apart from criticising the IB Joint Director Mathew John and Deputy Director RB Sreekumar, CBI also blames then IB Chief D C Pathak (referred to as DIB in the report) for the goof-ups in the case resulting in disaster to ISRO scientists. The CBI’s closure report clearly admonishes the IB’s interrogation team led by Mathew John and Sreekumar for putting pressure on the scientists and two women from Maldives to prove their point.

The closure report says there was no leakage of documents from ISRO or no money exchange was found. But the IB officials and Kerala Police officials were just pressing the arrested scientists and women to make false statements. Worse, the then IB Chief was just sending the daily interrogation notes (mentioned as UO or Un-Official (?)) and reports to Home Ministry and the Prime Minister’s Office (PMO) without verification (Page 13), says the CBI report.

The 32 page report ends: “The above mentioned facts show that the aforesaid IB officials comprising the team enquiring into ISRO case, acted in an unprofessional manner and were privy to the arrest of six innocent persons, thereby causing them immense mental physical agony. The senior officers who were supervising and monitoring the enquiries under reference, particularly,  Shri. Mathew John, Jt. Director and R B Sreekumar failed in their duty to conduct the inquiry in an objective and fair manner. At the IB Headquarters, the UO notes referred to herein-above were prepared based on these interrogation reports and without verification leading to serious complications including casting doubts on the integrity of two top ISRO scientists who were responsible for developing the PSLV project and launching our country into the space”.

The scientists were arrested and tortured in mid 1994 and were let off; after many years the CBI closed the case, blaming IB and Kerala Police for the unprofessional investigation. Now scientist Nambi Narayanan is fighting for justice to get back his lost honour. Others arrested with him  try to believe their bad days as their fate (bad karma).

This “fake scandal” had a disastrous effect on India’s cryogenic program. It led to the downfall of K Karunakaran, the Chief Minister of Kerala who could never become a Chief Minister again. Nambi Narayanan, an honest, sincere and brilliant scientist (he had a Masters from Princeton, an Ivy League University), who was a peer of A P J Abdul Kalam, was tortured, kept in a cell for days and even after he was acquitted, never given the same pride of place in the ISRO. 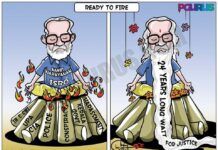