[dropcap color=”#008040″ boxed=”yes” boxed_radius=”8px” class=”” id=””]A[/dropcap] special CBI team interrogating long-absconding underworld don Chhota Rajan will visit Karnataka in a couple of days to enquire from the regional passport officials who had issued him a passport in 2003 on a fake name and address. The passport was made using the Tatkal (urgent) service with its validity date till 2008, sources said. “But Rajan managed to renew it on July 8, 2008 with its validity till July 7, 2018.”
The probe agency has booked Rajan in a case under the Passport Act, 1967, and separate sections of the Prevention of Corruption Act, 1988.

Rajan got an Indian passport (No. G9273860) made on the fake name of Mohan Kumar

Apart from that, a case of criminal conspiracy, cheating, cheating by impersonation, forgery of documents under relevant sections of the Indian Penal Code has also been added in the same First Information Report (FIR).
The case pertaining to this fake passport is the only matter for probing which the Central Bureau of Investigation (CBI) has got 10 days custody of the mafia don.
[dropcap color=”#008040″ boxed=”yes” boxed_radius=”8px” class=”” id=””]M[/dropcap]aharashtra Police is yet to transfer any criminal cases registered against Rajan to the CBI. Rajan is wanted for over 85 crimes, ranging from murder to extortion, smuggling and drug trafficking. Apart from Maharashtra, he has cases against him in Delhi, Uttar Pradesh, Gujarat and with the CBI.
Rajan stayed in Australia on the same passport for 12 years, between September 22, 2003 and October 24, 2015.
Sources said Rajan got an Indian passport (No. G9273860) made on the fake name of Mohan Kumar, resident of 107/B, Old M. C. Road, Azad Nagar, Mandya in Karnataka.
“The passport was made from Harare in Zimbabwe on September 22, 2003,” sources said.
[dropcap color=”#008040″ boxed=”yes” boxed_radius=”8px” class=”” id=””]O[/dropcap]fficial sources said some government officials working in the Karnataka regional passport office would soon get into trouble as the CBI officials are now planning to visit there to get details of the passport that Rajan managed to prepare after their confirmation of his fake identity and address.
“Either the government officials at the Karnataka regional passport office helped Rajan in providing him the passport on his fake name and address in Karnataka or he took advantage of the loopholes in their verification process while issuing passport.”
Sources said the address mentioned in Rajan’s passport was not wrong. “The address exists but who resides at the address is a matter of investigation.”
Officials privy to Rajan’s interrogation told IANS that he landed in Australia using the same passport, which was valid till July 7, 2018, and a tourist visa.
[dropcap color=”#008040″ boxed=”yes” boxed_radius=”8px” class=”” id=””]R[/dropcap]ajan, who fled from India in 1988 for Dubai, prepared the passport on the name of Mohan Kumar when he became afraid of being killed or arrested after the men of fugitive underworld don Dawood Ibrahim, his close friend before the 1993 Mumbai blasts conspiracy, attacked him in 2000 at a hotel.
Rajan managed a dramatic escape by jumping from the first floor of the hotel.
Rajan used the same passport to find his new hideout in Bali in Indonesia after his residency permit was to be ended on October 31, 2015. But his luck ran out and he was held at Bali airport on October 25 just after landing from an Australian flight, said sources.
Rajan landed in the immigration net in Bali when he accidentally revealed his real name, claimed CBI officials.
Although the forged documents had his name as Mohan Kumar, he instinctively said Rajendra Nikhalje when he was asked his name, the officials claimed. 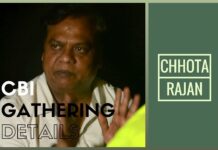 Chhota Rajan’s fingerprints from the early ’80s nailed him Grasim Industries’ net profit up by 17 percent in Q2