After the Central Bureau of Investigation (CBI) offered to probe, the Supreme Court Monday restrained Mumbai Police from filing a charge sheet against former Police Commissioner Param Bir Singh. However, the State Police was allowed to carry on investigations. In a big relief to Param Bir Singh, Solicitor General Tushar Mehta, appearing for the CBI, said the FIRs should also be entrusted to the central probe agency and he will file an affidavit regarding the same.

Today’s development is a big relief to Param Bir Singh as it is well known that BJP Central Government is supporting him after he picked fights with the Shiv Sena-NCP-Congress alliance-led Maharashtra Government. The bench comprising Justices S K Kaul and M M Sundresh also directed the CBI to file its response on the issue of whether the probe should be handed over to it. The top court said it was only concerned with the “likelihood of bias”. Suspended former Police Commissioner is facing a series of cases for misconduct and corruption charges, after he fell out with the State Government, following a fake bomb scare case in front of billionaire Mukesh Ambani’s home.

Senior advocate Darius Kambatta, appearing for Maharashtra, stated that Singh’s petition was a service dispute against departmental inquiries, which should be contested before the Central Administrative Tribunal (CAT). The bench then said, “What are your allegations regarding his service, etc, that is for you to take? But this is one of the very unfortunate messages.

“The only concern that we should have is, whether in regards to other matters, whether the CBI should consider the same or not,” it said. Senior advocate Puneet Bali, appearing for Singh, told the apex court that the Maharashtra government was acting with “mala fide” against the former police commissioner. “After your lordships’ order, I (Singh) have joined the investigation. All non-bailable warrants and proclamations against me have been cancelled.

“Then they file a charge sheet in one of the FIRs. That is a complaint filed by a person against whom I took action. Then they suspended me. The state of Maharashtra is trying to scuttle your lordship’s orders,” Bali said. The top court noted the submissions and allowed the Mumbai police to carry on the investigation and restrained it from filing the charge sheet. The Bench also extended the interim protection granted to Singh till January 1, 2022, when it will hear the matter next.

The state police had earlier told the apex court that Singh cannot be considered as a “whistleblower” under the law as he chose to speak out against alleged corruption involving former Home minister Anil Deshmukh only after his transfer.

After Singh was shunted out as Mumbai police commissioner in March 2021 in the aftermath of the ‘Antilia bomb scare case‘, in a letter to Chief Minister Uddhav Thackeray, he levelled corruption allegations against Deshmukh. In his petition, Singh had also alleged that DGP Pande told him that the inquiries were the fall-out of his allegations against Deshmukh, an NCP leader. Singh was transferred to the Home Guard after Mumbai police officer Sachin Waze was arrested in the case of an SUV with explosives found near industrialist Mukesh Ambani’s house, ‘Antilia’, and the subsequent death of businessman Mansukh Hiran, whose vehicle was used to plant bombs. 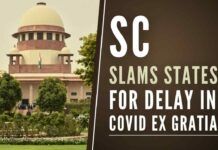