Threshold for investigating bank frauds lowered to Rs.3 crore by the CVC

The Central Vigilance Commission (CVC) on Thursday expanded the scope of the Advisory Board for Banking and Financial Frauds (ABBFF), which would now examine bank frauds of Rs.3 crore and above and recommend action. Till now, the ABBFF was only looking into banking and financial frauds of Rs.50 crore and above. With the above amendment, there will be complete synchronization of all the frauds where complaints/ FIRs have filed with CBI for the threshold of Rs.3 crore and above, said CVC in a statement.

“CVC in consultation with Reserve Bank of India (RBI) and Department of Financial Services has further expanded the role of ABBFF headed by T M Bhasin, former vigilance commissioner, to cover all banking and financial fraud cases involving the amount of Rs.3 crore and above, to examine the role of all levels of officials/ Whole Time Directors (including ex-officials/ex-WTDs) in Public Sector Banks (PSBs) and Public Sector Financial Institutions (PSFIs),” said the statement.

The cases classified as fraud (between Rs.3 crore and Rs.50 crore) and reported to RBI by banks and financial institutions on or after January 6, 2022, would also fall under the purview of the panel. “The ABBFF is functioning as a ‘Safety Valve‘ for bankers and it critically and comprehensively examines the gravity of lapses/ accountability, if any, on the part of officials/ Whole Time Directors of PSBs/ PSFIs, based on the documentary evidence,” said CVC.

The CVC, in consultation with RBI, in August 2019 constituted the ABBFF comprising four members for an initial term of two years. This period has been further extended by two years in August 2021. Bhasin, a veteran banker, served as vigilance commissioner in the CVC for four years from June 2015 to June 2019. Prior to that, he was chairman and managing director of Chennai-based Indian Bank for more than five years.

Other members of the ABBFF are Madhusudan Prasad, former secretary of Ministry of Urban Development; D K Pathak, former director-general of BSF; and David Rasquinha, former managing director of EXIM Bank. Lenders would refer all large fraud cases worth Rs.3 crore and above to the ABBFF and on receipt of its recommendation or advice, the bank concerned would take further action in such matter.

The Central Bureau of Investigation (CBI) may also refer any case or matter to the board where it has any issue or difficulty or in technical matters with the PSB and PFI concerned. 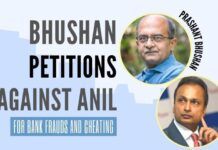