The Congress party does not have a clear ideology nor does it have any leader who can effectively communicate whatever little it has to offer.

Last week, there were 3 articles in TOI advising induction of new blood as leaders in the Congress party. But why waste time on a party which has no worthwhile leader and nothing positive to show as its performance over the last 70 years, as against, off-course, its record of emergency, Sikh massacre and corruption.

The facts of the emergency and Sikh massacre are too stark to be forgotten. But the facts of corruption are more often than not forgotten or get lessened in gravity, particularly to newer generations. Hence, how the legacy of corruption has been carried forward under Congress rule need to be recounted so that such evil regimes are never allowed again to continue with their misrule.

It would be difficult to find out a single leader in the Congress party who is above reproach.

Corruption and nepotism started under Nehru’s benign gaze in post-independence India with the Jeep Scandal, the Mundhra-LIC scandal and the Dharma Teja-Jayanti Shipping Corporation scam and has continued to flourish till 2014 under the patronage of his dynasty. These include Bofors and many cases of corruption perpetrated during the UPA 1 and UPA 2 misrule. Corruption was all-pervasive starting from bribes and tax evasions to large value financial fraud, black money generation and illegal overseas deposits.

Some Major Scams under UPA Government are:

2G Spectrum Scam (2008): One of the biggest scams in India was the 2G scam, in which telecom minister A. Raja was charged for issuing 2G licenses to private telecom players at very cheap rates in 2008. No rules and regulations were followed. The scam cost Rs 1.76 lakh crore to the government.

Commonwealth Games Scam (2010): The total worth of the Commonwealth Games Scam is estimated to be Rs. 70,000 crores. The face of the scam was Suresh Kalmadi, the Congress party representative to the 15th Lok Sabha from the Pune constituency. At that time, Kalmadi was the Chairman of the Organising Committee of the Delhi Commonwealth Games. Other big-shots allegedly involved were Sheila Dikshit, the then chief minister of Delhi and Robert Vadra.

Coal Scam (2012): With the Coal Scam, the government bore a loss of Rs 1.86 lakh crore. The CAG presented a report and pointed out the irregularities involved in the auctioning of 194 coal blocks.

Chopper Scam (2012): This scam is an example of bribery and corruption in India which involved many politicians, senior officials in India like former Indian Air Force Chief, Chief Marshal S.P. Tyagi, and helicopter manufacturer Augusta Westland. The company had given bribe to get a contract for supplying 12 helicopters worth USD 610 million. A note presented on March 15, 2008, in an Italian court indicates that the former Congress President Sonia Gandhi was also probably involved in the scam.

Adarsh Scam (2012): The Adarsh Housing Scam is related to the allocation of flats below market rates in a very posh 31-storey building, the Adarsh Housing Society in Colaba, Mumbai. Allegations have been made against three former chief ministers of Maharashtra – Sushil Kumar Shinde, Vilas Rao Deshmukh and Ashok Chavan.

The list of scams under the UPA government is too long and looks never-ending. High profile leaders who have been accused of corruption recently include the likes of former External Affairs Minister Salman Khurshid who was implicated in a Rs 71 lakh scam and UPA Chairperson Sonia Gandhi and her son Rahul who were indicted by BJP leader Subramanian Swamy of a Rs 1,600 Cr fraud. Oscar Fernandez, Sam Pitroda and Motilal Vora are co-accused in this case.

Sonia Gandhi’s son-in-law Robert Vadra and P Chidambaram and his son Karthi Chidambaram have recently come under the spotlight for alleged graft through their businesses and office. The Enforcement Directorate has summoned Robert Vadra in money laundering case relating to alleged possession of foreign assets. He has been granted anticipatory bail. Chidambaram and his son have been charged by CBI in Aircel-Maxis case and INX Media case. Now, there are reports that CBI is going to initiate proceedings against Kamal Nath for corruption. This way it would be difficult to find out a single leader in the Congress party who is above reproach.

India has voted against entitlement which the Congress represents. Scroll in says it is time the Congress stood for a political idea rather than a political family. But the party does not have a clear ideology nor does it have any leader who can effectively communicate whatever little it has to offer. It is therefore only natural and desirable for the party to go into oblivion. 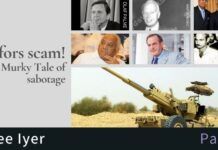