The Dravida Munnetra Kazhagam (DMK) Member of Parliament (MP) Kanimozhi on Sunday created a flutter by picking up a fight with the Chennai Airport security staff by accusing them of mistreating her for not speaking in Hindi. Kanimozhi, who is caught for taking 2G Scam bribe money of more than Rs.200 crore through her TV Channel Kalaignar TV from North Indians like Shahid Balwa, Karim Morani and Vinod Goenka in 2G Scam claimed that she knew only Tamil and English and accused the Central Government of imposing Hindi.

Today at the airport a CISF officer asked me if “I am an Indian” when I asked her to speak to me in tamil or English as I did not know Hindi. I would like to know from when being indian is equal to knowing Hindi.#hindiimposition

Currently, the 2G Scam involving more than Rs.200 crores kickback to Kanimozhi is pending before the Delhi High Court. The Central Bureau of Investigation (CBI) and the Enforcement Directorate (ED) in its appeal and charge sheet clearly state how 2G scam money from Hindi-speaking-other-accused persons landed at Kanimozhi’s side. Many lawyers of Kanimozhi are North Indians including the late Ram Jethmalani.

Kanimozhi is lying when she says doesn’t know Hindi. She has been in Delhi politics since 2005. Niira Radia tapes exposes her that she was in regular touch with many scamsters from North India. Moreover, her son’s name is Aditya (a Sanskritised name) and even her late father DMK’s supremo’s name Karunanidhi is a Sanskritised word. Karunanidhi’s actual name Dakshinamurthy is also a Sanskritised word. 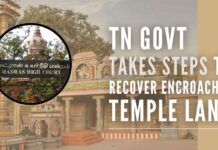 42 regional parties have their voluntary contributions amounting to a whopping 77.03%