Punjab National Bank (PNB) Fraud makes us wonder how so many checks and balances in the banking system have been subverted by someone successfully for so many years, without being detected. There are the necessary checks on the PNB side, checks at the International SWIFT Banking side, periodic and annual reviews of payments and securities, internal audit (by the bank), statutory audit (by auditors of the banks), concurrent audit (by external auditors at the branch), and inspection by RBI,”.  It is very unlikely that all the above involved are in collusion. We will hopefully know soon.

Place the onus of proving innocence on the accused, and you will find that the fraudsters will be a lot more scared to carry out their brazen frauds. The number of frauds will come down by more than 90%. Just the fear of being caught and jailed will do the trick.

We need to look at fixing all ends of the problem. However, in my opinion, the weakest link in the system is the judiciary, and it is easiest to fix it. Strange though my assertion may seem, our archaic legal system places such an onerous responsibility on the prosecution that scamsters feel bold to defraud our Governments and PSUs with impunity.

I have been calling for many changes in our justice delivery system, the most important one being, “once prima facie guilt is established on anyone by a court, placing the burden of proof of innocence on the accused.”

We have made the task of proving every case so very difficult for the investigating officials that they end up spending enormous amounts of time gathering evidence, giving the high and mighty the chance to get all inside information from the Government (which is so very easy), giving all the time on earth for the culprits to erase the evidence, and finding just one little loophole in the case and getting the benefit of doubt, and if all this is not possible, fly away at leisure, even bidding goodbye to their friends and relatives.

Place the onus of proving innocence on the accused, and you will find that the fraudsters will be a lot more scared to carry out their brazen frauds. The number of frauds will come down by more than 90%. Just the fear of being caught and jailed will do the trick.

For example, in this case, if Nirav Modi or the bank officials thought that once any of the investigating agencies found a prima facie case that he had faked documents, they could have arrested him and his accomplices and proved prima facie in this case that he had faked documents through officials; they won’t have to prove their entire case to the hilt.

And the culprits would have had to implicate themselves if they had to try to defend their cases. So, they dared not have attempted such a brazen fraud. Same with Lalit Modi, Vijay Mallya and others of their ilk. And such cases would be over in just a few months. We won’t need to increase the number of courts or judges.

So, the Government and Judiciary should seriously consider this suggestion that once a prima facie case is established, the onus of proving innocence should be on the accused. Incidentally, this suggestion itself has come from a reputed Retired High Court Judge of Chennai. He says many legal luminaries are in agreement.

As long as we continue with the current system where the ostensible goal is “let 99 criminals escape, no innocent should be punished” (but the result on the ground is letting almost all criminals escape and not ensuring an innocent is not punished anyway), we will only have many more such scams. 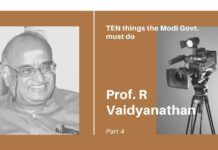 Judicial Reforms: A Suggestion to the Chief Justice of Supreme Court

SC asks Swamy to mention his Ayodhya plea after verdict on...