Hindu Samhati founder Tapan Ghosh was arrested soon after he staged a highly successful rally in support of Israel in Kolkata, a stronghold of fundamentalist Islamic clerics, who were further agitated by news that fourteen members of a Muslim family underwent Ghar Wapsi (return to the Hindu fold) publicly, as part of the event. The rally called for India to stand by Israel and move its embassy to Jerusalem. It also demanded the renaming of Sealdah station as Dr. Syama Prasad Mookerjee Terminus after the Bharatiya Jana Sangh founder and the installation of a statue of Netaji Subhas Chandra Bose near Parliament.

At the heart of the matter is the Muslim vote, crucial to the victory of the TMC or revival of the Communist Party of India-Marxist, the former patron and ruling party for three decades.

As news of the rally spread, the ruling Trinamool Congress (TMC) ordered the arrest of the Hindu leader whose audacity poses a direct challenge to its minority vote bank.

Ostensibly, the arrests were due to a scuffle between journalists and supporters of the Hindu Samhati, who allegedly objected to journalists asking members of the ‘ghar wapsi’ family (of Hussain Ali and Moyna Bibi) if they had been offered any inducements to return to the Hindu fold. The Hindu Samhati organised the rally to mark the tenth anniversary of its Foundation Day, at the Rani Rashmoni Avenue. Renowned Buddhist monk Karuna Lankar from the Chittagong Hill Tract, Bangladesh, Swami Pradiptananda Ji Maharaj of Bharat Sevashram Sangha (BSS), veteran Maj-Gen G.D. Bakshi and noted pro-Israel journalist Vijeta Uniyal were among the dignitaries at the function.

When the family members denied the insinuations and referred the journalists to Samhati volunteers, an altercation followed; amidst allegations of abusive and filthy language against women volunteers, a scuffle broke out.

Samhati members claim that Tapan Ghosh was detained for questioning at Lalbazar police headquarters, after aggrieved journalists lodged a complaint, though he was far from the scene of the altercation at the time of the alleged incident. Ghosh had not been released until the time of writing. Three other activists were arrested for the attack on journalists and an inquiry ordered into the incident. The Samhati’s assistant secretary Sujit Maity claims that the organisation was celebrating its tenth Foundation Day when police attacked their supporters without any provocation. He emphatically denied that Samhati activists were involved in any attack on representatives of the media, or police.

Tapan Ghosh blamed the attack on “provocation” by the journalists, but added that “I take full responsibility and promise to make sure such incidents do not recur. But our people were provoked by ABP Ananda.” He added that the Samhati volunteers and supporters “have to be mature enough to understand the designs of journalists, most of whom remain Left-minded. These journalists do not want to see a reawakening of Hindus”.

Welcoming the family that had returned to the Hindu fold, he urged them to initiate a return movement in their districts and blocks and urged Hindus “let us welcome all Muslims to Hinduism.” Urging Indian jihadis to return to dharma, he pleaded, “Stop making your children sacrificial lambs for Jihad. Come, let us again together make a Mahan Bharat, which will show the whole world the path to peace and happiness again”.

At the heart of the matter is the Muslim vote, crucial to the victory of the TMC or revival of the Communist Party of India-Marxist, the former patron and ruling party for three decades. Experts estimate that Muslims comprise roughly 30 percent of the Paschimbanga population, at least three percent above official Census figures. Their anger could endanger the re-election prospects of the TMC.

Tapan Ghosh’s public demonstration of the confidence that Hindus and Muslims repose in his leadership is a major blow to the TMC. And despite differences with Ghosh over his outspoken articulation of issues of concern to the nation and the Hindu community, the inadvertent beneficiary of his actions would be the Bharatiya Janata Party that is desperately trying to establish itself in eastern India and the north-east.

The rally drew a crowd of several thousand (estimates vary from 10,000 to 70,000), possibly the largest pro-Israel rally in India; it was widely followed in the social media. This reportedly upset the extremist outfits that have a substantial presence in Bengal and have been active there, as attested by the Burdwan blasts, Kaliachak riots, and other incidents.

The BJP-led government at the Centre has been carefully nuancing its ties with Israel, Palestine, and major Islamic nations such as Saudi Arabia, Jordan, the United Arab Emirates, Iran, Malaysia, and others. Unfettered by such diplomatic niceties, Tapan Ghosh has been advocating a blatantly pro-Israel alliance on grounds that the Jews, like the Hindus, have been fighting for their survival for centuries. He points out that in the States of Paschimbanga, Assam and Jharkhand, Hindus are under severe threat.

The new Hindu Samhati president, Debtanu Bhattacharya, lambasted Mamata Banerjee’s politics of “Muslim appeasement” after being “voted to power by Hindus”. Pointing out that the TMC performed worst in districts like Malda and Murshidabad where the population of Muslims has surpassed 50 percent, which proves that it came to power on Hindu votes. He accused the BJP leaders such as Rupa Ganguly, MP, of the same policies, pointing out that she never visited the homes of Hindu victims of atrocities.

Samhati vice president Devdutta Maji said that the first Israeli Prime Minister David Ben-Gurion and Tapan Ghosh are role models for Hindus. Previously, in 2014, the Hindu Samhati organised a 20,000-strong rally in favour of Israel at the time of the Hamas rocket attack.

Chief Minister Mamata Banerjee condemned the incident and promised action against those involved in the attack on journalists. Other parties criticized the Hindu Samhati and RSS for allegedly organising an open religious conversion programme in the heart of the city. CPI-M MLA Sujan Chakraborty blamed the TMC for the incident and said the administration was pampering Hindu fundamentalist forces to destroy the State’s secular tradition: “Why did the Sangh Parivar outfit single out the media for its attack? It was absolutely within the rights of the journalists to ask questions of the reported conversion and when they were attacked for this it means the organisation has something to hide”. BJP state president Dilip Ghosh condemned the attack.

Tapan Ghosh resigned from the RSS a decade ago to fight for oppressed Hindus in rural Bengal in a more pro-active manner. Adhering to this commitment rigorously, activists of the Samhati reach the spot of every alleged incident of rape, murder, desecration of temples, land grab, etc. and fight to have cases registered against the accused. Ghosh’s battle cry, Kshatriyakaran Kshatriyakaran (Kshatriya fighter, protector of society) has reinvigorated rural Bengalis to defend their land, properties, ancient indigenous civilization and faith. The organisation is the first to provide succour in humanitarian crises such as during the jihadi attacks at Deganga, Bardman, Kaliachak, Medinipur, Baduria-Basirhat, and recently extended its work to Assam and Jharkhand. 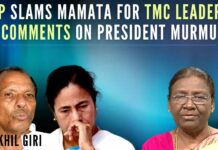 How are the US Presidential hopefuls doing?