The political crisis in Arunachal Pradesh took a new turn on Thursday, as BJP and rebel Congress legislators chose Kalikho Pul as the new chief minister, while the Gauhati High Court stayed all decisions taken by the legislative assembly a day earlier, including removal of Speaker Nabam Rebia.

The high voltage political drama continued on Thursday, as 34 legislators including Deputy Speaker T. Norbu Thongdok, 20 Congress legislators, 11 BJP legislators and two Independent legislators took part in the second day of the “winter session” of the assembly at a hotel conference hall.

Leader of Opposition Tamiyo Taga of the BJP tabled a no-confidence motion against Tuki and his council of ministers, which was adopted in the house.

The deputy speaker then called for the chief minister and ministers to participate in the discussion on the motion but they were absent. After the motion was adopted, Thongdok adjourned the house sine die.

Meanwhile, the Gauhati High Court single bench of Justice Hrishikesh Roy stayed the proceedings of the assembly till February 1, while hearing a writ petition filed by Supreme Court advocate Kapil Sibal on behalf of Speaker Rebia.

Rebia, in his petition, alleged that Governor J.P. Rajkhowa summoned the winter session without consulting Chief Minister Tuki and his council of ministers and that it was done at the behest of a certain political party.

The court will hear the next arguments on February 2 next year.

Tuki and 26 lawmakers supporting him have boycotted the assembly proceedings terming them “illegal and unconstitutional”.

Rajkhowa convened the winter session on Wednesday instead of its normal schedule from January 14 next year.

Amid protests, Wednesday’s “session” was held at a community hall with the participation of only 34 legislators, including 21 dissident Congress members, with the deputy speaker in the chair.

The house then passed an impeachment motion against Speaker Rebia by voice vote. Tuki and his supporters opposed the holding of the “winter session” and abstained from it.

In his letter to Mukherjee and Modi, Tuki pointed out that while Article 174 of the Constitution provides for the governor to summon a session of the assembly on the aid and advice of the chief minister and his council of ministers, the governor summoned the session on the strength of Article 175(2) which was “only for a bill and not any resolution of the members of the house”.

The chief minister said that despite he and his council of ministers registering protest and requesting the governor on December 15 to reconsider his illegal order, “he refused to heed to our genuine request”.

Meanwhile, the issue rocked proceedings in both houses of parliament.

The Rajya Sabha was repeatedly disrupted by the opposition Congress, forcing the chair to adjourn the house for the day after three adjournments.

Leader of Opposition Ghulam Nabi Azad raised the issue, and questioned the conduct of the governor.

“How can the sitting of the house be done outside the assembly and in a private house? It has never been done in the history of independent India,” Azad said.

He also accused the central government of destabilising the state government.

Deputy Chairman P.J. Kurien said the notice given by Azad was under consideration of the chairman, so the matter could be discussed only after his ruling.

Janata Dal-United member Sharad Yadav and Communist Party of India-Marxist member Sitaram Yechury also demanded that the matter be discussed immediately as it was urgent.

The Congress staged a walkout from the Lok Sabha over the issue.

Congress leader Mallikarjun Kharge tried to raise the issue but Deputy Speaker M. Thambidurai ruled that such an issue cannot be raised in the house. 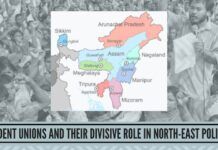 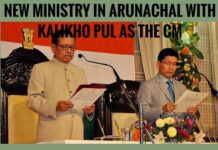