[dropcap color=”#008040″ boxed=”yes” boxed_radius=”10px” class=”” id=””]P[/dropcap]anaji, Dec 17 – Suresh Prabhu may well be India’s railways minister, but for Goa, in Chief Minister Laxmikant Parsekar’s words, he is nothing short of a ‘prabhu’ (lord) himself, especially vis-a-vis the quantum of projects sanctioned by him for India’s smallest state over the last one year.

Suresh Prabhu has given a lot to Goa over the last few months. We just say, ‘Hay Prabhu (O lord) please bless us with these things’. And Prabhu immediately obliges. For Goans, Suresh Prabhu is a real prabhu.
– Laxmikant Parsekar

Prabhu, a son-in-law of Goa, who has made 10 official trips to the state since assuming office in November 2014, has launched a batch of new trains, started a new railway training institute and announced doubling of railway tracks – all of which, according to Parsekar, has been a godsend bonanza of sorts for Goa, which has historically been at the tail-end of railway ministry largesse.

“Suresh Prabhu has given a lot to Goa over the last few months. We just say, ‘Hay Prabhu (O lord) please bless us with these things’. And Prabhu immediately obliges. For Goans, Suresh Prabhu is a real prabhu,” Parsekar told IANS.

Barely a month after taking over, Prabhu, on his first visit to Goa, announced a holiday special from Mumbai for the popular Christmas and New Year Season. The train started within a week.

A month later, Prabhu was at it again, launching the concept of a Deccan Odyssey-styled luxury train along the Konkan region with a touch of Goa to its interiors. The train is expected to start rolling out some time next year.

On a request from Parsekar in May, the minister allotted to Goa its first diesel electric motor unit (DEMU) a couple of months back. Last month saw the launch of the Goa-New Delhi Rajdhani express, while the country’s first double decker air-conditioned Shatabdi train was also flagged off by Prabhu from the Margao railway station earlier this month.

The doubling of the Konkan Railway was an old proposal that never moved forward in view of the lack of government will, high costs and an environmentally fragile region.

The cost of doubling the 736-km track from Roha in Maharashtra, through Goa to Mangalore in Karnataka for around Rs. 10,500 crore (over $2 billion) was cleared by the railway ministry with Prabhu at the helm, while complete electrification of the line for Rs.750 crore is also under way.

In October, the Konkan Railway started the George Fernandes Institute of Tunnel Technology in Margao, which, in partnership with Goa University, will promote education and research in tunnelling technology, which the country desperately needs for creating connectivity to its remotest regions.

For his part, Prabhu, whose wife Uma hails from the village of Ribander on the outskirts of Panaji, believes that the potential of Goa, which receives nearly three million visitors annually, as a tourist destination can be furthered by increasing connectivity with the rest of India through the railway network.

“Goa has its own identity and created a niche for it in the tourism world. It is difficult to say no to Goa,” Prabhu has said, making a case for pushing for the series of state-related projects. 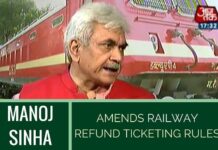