The Dravida Munnetra Kazhagam (DMK) has chalked out a dangerous blueprint for keeping the rural population in the State as eternal illiterates and in abject poverty.

M K Stalin, the working president of the party in the absence of his bed-ridden father M K Karunanidhi (95), declared late Thursday of his grand plan to agitate against the Madras High Court order asking the Tamil Nadu government to set up Jawahar Navodaya Vidyalayas in all the districts of the State. The DMK scion declared that any attempt to open Jawahar Navodaya Vidyalayas in Tamil Nadu would be resisted by the DMK even if it means murder and mayhem.

“The youth of Tamil Nadu and the DMK cadre would lay down their lives if the Centre acted against the two-language policy and primacy of Tamil. The Centre and State governments should not sow seeds for the second anti-Hindi imposition protests in Tamil Nadu,” Stalin warned in a statement which was released to the media.

A division bench of the Madras High Court had issued orders to the government of Tamil Nadu to provide infrastructure and NOCs to the Union Ministry of Human Resources Development for setting up Navodaya Vidyalayas in the State. Immediately after the verdict was pronounced, the DMK activists went overboard and charged that the two judges, Justice K K Sasidharan and Justice G R Swaminathan were agents of the Sangh Parivar.

Syllabus of the Navodaya Vodyalayas is compatible with the Central Board of Secondary Education curriculum. Though all the States had welcomed the concept of Navodaya Vidyalaya with an open heart, Tamil Nadu remained inaccessible to the union ministry of human resources because of stiff opposition from the Dravidian parties. They oppose Sanskrit and Hindi because of their fear that the new generation would get an exposure to the rich cultural and educational heritage of the country if they are taught Hindi and Sanskrit.

There are nearly 600 Navodaya Vidyalayas all over the country and students from these schools, all with a rural background, score impressive marks in the NEET as well as other competitive examinations. Stalin and his party are totally against the rural children getting a quality education as they would start asking inconvenient questions if they are taught Sanskrit and Hindi.

Thol Thirumavaavan, who got the name of his 87-year-old father Ramasamy changed to that of Tholkappian because of his name’s Hindu connection, had declared that NEET, GST (Goods and Services Tax) were attempts by the Sangh Parivar to saffronise education and culture of India.

Interestingly, Stalin’s children studied in the best of schools and colleges in Tamil Nadu. Though the ideas of NEET and GST are the brainchildren of the previous Congress-led UPA regime at the Centre (2004 to 2014), in which the DMK was the second largest alliance partner, both the Dravidian outfit and the Congress have washed their hands off them. “It is true that the UPA government proposed NEET. However, our government did not make it compulsory. It was to be implemented only if States wanted it,” said S Thirunavakarassar, a former BJP leader who crossed over to the Congress in search of greener pastures after the 2004 Lok Sabha election. Thirunavakarassar is the president of the Tamil Nadu Congress Committee.

Thirunavakarassar, his madam Sonia Gandhi and her son Rahul Gandhi who has been powered with .artificial intelligence since last month has not opened their mouth against Stalin’s comments on Navodaya Vidyalayas. Though these schools are living memorials for Rajiv Gandhi, the DMK chief does not miss an opportunity to ridicule and taunt Rajiv Gandhi in the name of the Navodaya Vodyalayas. The Congress has no alternatives other than silently suffer the humiliations inflicted by the DMK leadership.

A careful analysis of the statements issued by Stalin, whose thinking style is not much different from that of Rahul Gandhi, will prove that Stalin is stoking the regional and parochial sentiments of the people of Tamil Nadu. It is the anti-Hindi agitation launched by the DMK which came in handy for the party to end the uninterrupted rule by the Congress. The Congress, which ruled Tamil Nadu since the independence till 1967 is yet to get over the shock defeat the party faced in the 1967 assembly elections.

The DMK is notorious for its anti-India stance. Late C N Annadurai, the founder leader of the DMK, had declared in Rajya Sabha that a separate Dravidian land incorporating some parts of Kerala, Karnataka and Andhra Pradesh and the northeast of Sri Lanka was his objective. He was made to shun this view following the amendment of a section of the Constitution which forebode those speaking for a separate country/state from contesting elections.

Senior BJP leader Dr Subramanian Swamy scoffed at the statement issued by Stalin. “This is a court order. If he does not like the order, let him approach the higher judiciary. His declaration that the DMK cadre would lay down their lives to fight against Navodaya Vidyalayas is mere hogwash. There is a government in Chennai and I am sure Stalin ha not forgotten what happened on January 30, 1991. We, the Central government summarily dismissed the then Tamil Nadu government led by his father Karunanidhi following breakdown in law and order. This time we will arrest all those who come out and agitate against the Court order and put them into prisons. If the Tamil Nadu prisons are not sufficient, we will send them to jails in Andaman,” said Dr Swamy who is a strong proponent that the quality of school education should be of the highest order.

Last heard, Stalin will be supported by the CPI-M, the CPI, the VCK, the Naam Tamilar Katchi, Muslim League, Manithaneya Makkal Katchi (an Islamic terrorist organisation) and of course the Congress. Both the Nehru-Gandhi dynasty and the Karunanidhi dynasty want the people of Tamil Nadu to remain illiterate because of their fear that if the rural people get educated, the dynasts may have to face challenges from emerging leaders of the new generation, said a senior political commentator. 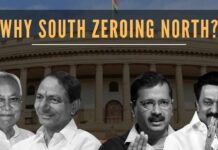 Defence & Finance by the same person – an Oxymoron?