The State of Kerala, hitherto accessible only to the Marxists, Methrans and Mullahs (3M), threw open its doors to a bit of Hindutva on Wednesday. For almost two hours, the only thing that was debated and discussed in the State was the Ayyappa Jyothi along the 795 km stretch from Mangalore in Karnataka to Kanyakumari in Tamil Nadu.

Lord Ayyappa is known for his avatar as a Brahmachari in the form of the presiding deity at Sabarimala. Even 200 years ago, women were not allowed inside the shrine situated in deep forests of the Western Ghats.

Starting at 6 pm and lasting up to 7 pm, this stretch of  geography saw the three States coming alive with millions of Ayyappa devotees lining up the main thoroughfare holding chiraths (lamps made of mud in which the wicks soaked in oil were burnt) and praying to Lord Ayyappa to light up the outdated Marxism  filled  minds of the Comrades with fresh air and knowledge.

They chanted “Swamee Saranam” and “Ayyappa Saranam”  as the chiraths lighted up the entire stretch of the 795 km long route. Women and children constituted a major chunk of the participants. If you thought there were only Hindus, you are off the mark. Even a small town like Perumbavoor saw the participation of hundreds of Christians in Ayyappa Jyothi. The event at Pulluvazhi in Ernakulam district along the Main Central Road was scheduled to be inaugurated by the vicar of St Thomas Church but a death in the parish kept him away as he had to attend to the funeral rites of the departed soul, an 88-year-old member of the laity. “We want to preserve the serenity and sacredness of Sabarimala because we feel it is our duty to do so. There may be religious conversion happening all over the country. But, please remember, we true Christians do not welcome or accept the converts in the heart of our hearts,” said Mazhuvancherry Jaison, a devout Christian from Perumbavoor.

The Ayyappa Jyothi was organised as a low key affair to convince the Marxist government in Kerala the need to preserve the sanctity of the famous shrine of Sabarimala. For centuries, women in the childbearing age were not allowed at Sabarimala. History books site many reasons for the restrictions imposed on menstruating women from entering the temple.

Lord Ayyappa is known for his avatar as a Brahmachari in the form of the presiding deity at Sabarimala. Even 200 years ago, women were not allowed inside the shrine situated in deep forests of the Western Ghats. There were reasons for the ban on women at Sabarimala. Not long back, the pilgrimage to Sabarimala was not an easy affair. There was no guarantee that the pilgrim would come back after the arduous journey. One has to trek all the way through dense forests infested with all kinds of wild animals barring lions to reach the shrine. Even the priests used to come out of the forest after the 41-day pooja and stayed at a safe distance from the temple. Even young and energetic men had feared for their life and one need not explain much about the condition of women. The pilgrimage is preceded by 41 days of tough and spartan life sacrificing all amenities of the modern world. That’s why women in the childbearing age were prohibited from undertaking the pilgrimage to Sabarimala. The belief and traditions continue even in modern times.

What was unique about the Ayyappa Jyothi of Wednesday was the low key preparations by the Ayyappa Karma Sena, the umbrella organisation which brought together all the devotees

“To equate it with caste and religion is against the truth. Women belonging to all castes are barred from undertaking this journey,” said Swamy Chidanandapuri, the spiritual leader of Hindus in Kerala who is also the Head of the Advaita Mutt at Kulathoor near Kozhikode.[1]

What happened in Kerala on December 27, 2018, was a unique feature which brought together all segments of Hindu society to save the purity and pristine glory of  Sabarimala. There is an effort by the CPI-M led Kerala Government to convert the temple into a commercial centre. Chief Minister P Vijayan, an atheist, has no love lost for the Hindu devotees and wants to do away with the age-old custom in Sabarimala. “We can mint money and that too in billions if we can keep the temple doors opened for 365 days in the year,” Vijayan is reported to have told the Travancore Devaswam Board officials in his first ever meeting with them after swearing in as chief minister.

It is against this kind of hatred and aversion, and that too selective hatred and aversion, that devotees across the States of Karnataka, Kerala and Sabarimala came together. It may be noted that no true women devotees of Lord Ayyappa have come forward to visit the temple despite the Supreme Court order of September 28. “The general feeling is that the CPI-M led government is bent upon hurting the Hindu sentiments by encouraging activists to undertake pleasure trip to Sabarimala. Those who tried to enter the shrine were all characters with shady and dubious records. There is an unseen chain which links these Maoists, Periarites, Marxists and the self-styled human rights and women rights activists,” said Suresh Gopinath, a chartered accountant who was once a card-holding member of the CPI-M.

What was unique about the Ayyappa Jyothi of Wednesday was the low key preparations by the Ayyappa Karma Sena, the umbrella organisation which brought together all the devotees. Even at 3 PM on Wednesday, there was no sign of any crowd assembling along the 795 km long route. They came silently, like the initial waves of a tsunami. All the participants were told well in advance where they have to assemble to form part of the Jyothi. It was a disciplined and military-like operation. By 6 PM, the line of devotees was in place and it was a visual treat to see them standing along the route, holding the chiraths and chanting the Ayyappa mantras.

Finally, what we saw along the entire stretch in Kerala is the unprecedented participation of housewives in the Jyothi While the entire programme was a huge success, the only place where the Ayyappa Jyothi did not find a mention was in Deshabhimani, which is published as the mouthpiece of the CPI-M. “Barring some junctions, there was no Ayyappa Jyothi anywhere in Kerala,” read the headlines of the Marxist paper.

The fact that Ayyappa Jyothi ended up as a major success could be understood from the number of attacks unleashed by the Marxists on people including women and children who were on their way to attend the event. Eight persons including children and women suffered injuries when Marxists pelted stones at a group of devotees in Kerala’s Kannur district. The injured have been admitted to the medical college hospital at Kozhikode, Govind Bharathan, senior advocate of Kerala High Court who travelled all the way from Ernakulam to Kaladi to join the Jyothi said it was a tremendous success. “I have never experienced an event like this in my whole lifetime. Now I feel I have achieved something in my life. To be a part of the human chain stretching from Mangalore to Kanyakumari is something which one should experience,” said Bharathan.

Senkumar told reporters after lighting the Jyothi at Attingal near Trivandrum that the lights would enlighten the forces which were trying to desecrate Sabarimala. “That’s the message which we want to give through the Jyothi. The prayer of the Hindus itself is Lead us from Darkness to Lightand to take us from ignorance to a world of knowledge,” said Senkumar.

Finally, what we saw along the entire stretch in Kerala is the unprecedented participation of housewives in the Jyothi. “We do not want to tell anything. But this move by the Kerala Government and the scenes which were aired by TV channels hurt us. Someone is trying their best to destroy the purity of the centuries-old temple and it is painful,” said Anita Prakash, a homemaker who had travelled all the way to MC Road from her home at Kothamangalam in Ernakulam district.

Kerala after the Ayyappa Jyothi is not the same what it was before the Jyothi was lighted up. Over to Amit Shah and Narendra Modi now. Kerala is waiting for you. 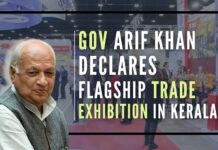 Part 5 – Why is TTD against the MirasiArchakas? The Protectors...