[dropcap color=”#008040″ boxed=”yes” boxed_radius=”8px” class=”” id=””]K[/dropcap]abali, the latest blockbuster starring Rajnikant, has landed in controversy with movie makers in Chennai questioning the award of U certificate by the Central Board of Film Certification  to the film though it contained many scenes of bloodshed and violence. The U certificate awarded to the movie makes it eligible for unrestricted exhibition in India as well as tax exemption in Tamil Nadu.

“The movie Kabali was awarded ‘MA 15+’  by Australian Classification, Department of Communication and the Arts, Government of Australia. We also understand that Kabali has been issued UA certificate by the government of Malaysia. But how come it was awarded a U certificate in India in spite of many scenes portraying murder and mayhem,” asked director S V Shekher, who is also the chairman of the zonal committee, Central Board of Film Certification.

…the movie ended with the caption “Finally, Kabali surrendered to Police”…

Shekher said the award of U certificate to Kabali is proof of shady deals happening in the Central Board of Film Certification. “How come a movie which was graded MA15+ by the Government of Australia indicating that it is a restricted movie meant for Mature Audiences and hence unsuitable for persons below the age of 15 could be given U certificate in India?” said Shekher. He said the Malaysian government deleted many scenes from the movie and it had a different ending.

[dropcap color=”#008040″ boxed=”yes” boxed_radius=”8px” class=”” id=””]A[/dropcap]ccording to Australian Classification, movies graded MA 15+ are legally restricted to persons 15 years and over. “It may contain classifiable elements such as sex scenes and drug use that are strong in impact. A person may be asked to show proof of their age before hiring or purchasing an MA+ film or computer game. Cinema staff may also request that the person show proof of their age before allowing them to watch an MA+ film. Children under the age of 15 may not legally watch , buy or hire MA+ classified material unless they are in the company of a parent or adult guardian. Children under 15 who go to the cinema to see an MA+ film must be accompanied by a parent or adult guardian for the duration of the film. The guardian must be an adult exercising parental control over the person under 15 years of age. The guardian needs to be 18 years or older,” says Government of Australia explaining the significance of the grading.

In a letter addressed to Pahlaj Nihalani, chairman, CBFC, Shekher has pointed out that Kabali has been graded UA in Malaysia/Singapore while Australia has classified the movie as one with Strong Violence.

The award of U certificate to Kabali has resulted in producer Thanu walking away with a tax exemption of Rs 30 crore. “The classification of Kabali as a U certificate movie calls for a CBI probe into the functioning of the Chennai office of the CBFC,” said Shekher.

“Kabali is a don/mafia underworld gangster story and features continuous bullets shots, killing of more than 50 persons, chopping one’s  hand  and sending it in parcel, killing a person by hitting him with glass bottle straight on the head. It is shocking to see that this movie was given U certificate,” Shekher said in the letter to Pahlani, a copy of which has been accessed by PGurus.

[dropcap color=”#008040″ boxed=”yes” boxed_radius=”8px” class=”” id=””]W[/dropcap]hat provoked Shekher to question the CBFC is a recent decision by the  Regional Officer of Chennai to award UA to a ghost movie shot in the back drop of a comedy story targeting child audience.  Three members who previewed the movie wanted it to be issued U certificate, while a lady member and the RO over ruled them and graded it as UA. The UA certificate means the movie could not be screened in prime time TV channels and children below 15 years of age will be able to watch the movie only in the presence of their parents.

“There is nothing diabolical or frightening in the movie. Though there are ghost scenes, the audience will enjoy it because of the comedy behind the scenes,” said Sridhar about “Aangaleya Padam”, the movie.

Another movie maker, who did not want his name to be quoted, said laws should be equal for all and there should not be any special privileges for particular actors/directors because of their political contacts.

“We normally have our own police advisory unit in the censorship board. For certain movies that we feel need extra input, we call them in for viewing too,” Abdul Halim Abdul Hamid, Film Censorship Board Chairman has been quoted by Malay Mail. Many scenes from the movie were deleted as police feared those scenes would encourage gangsters. The paper said the movie ended with the caption “Finally, Kabali surrendered to Police”.

Kalaipuli Thanu, producer, Kabali was not available for comments as he refused to answer phone calls.
Note:
1. Text in Blue points to additional data on the topic. 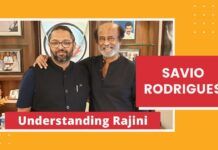 Prof RV on the evolving political situation in Tamil Nadu 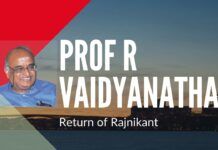 Prof R Vaidyanathan on the re-emergence of Rajni the politician – Is it for real this time?