Namaskar and welcome to Daily Global Insights Episode 276. Wednesday, November the 10th and here are the main points of discussion.

• Mr. Xi Jinping says that China is Prepared to work with US on Condition of Mutual Respect

• Members of APEC including US and China held a Virtual Summit on Tuesday leading up to the Friday Summit, pledging to expand Vaccine Supply and step up the resumption of Travel. • Governments around the world should not attempt a one-size-fits-all policy for clean energy transitions, said Amin Nasser, the President and CEO of Saudi Aramco. A similar plea was made by Indian PM Modi at the Climate Summit in Glasgow

• China will finance the construction of an outpost for a special forces’ unit of Tajikistan’s police near the Tajik Afghan border. The location adjacent to Chinese Xinjiang Province will not have any Chinese Forces.

• Afghan Humanitarian Crisis Dominates Discussions between NSA Ajit Doval and his Uzbek and Tajik Counterparts. US Envoy for Afghanistan Thomas West to Visit India as part of his ongoing trip

• On Tuesday evening News broke out that a US Navy C40-A plane carrying US Congressional Senators had taken off from Clark Air Base, Philippines and landed at Taipei Seongsan Airport, bringing Condemnation from Beijing

• The U.S. Coast Guard (USCG) recently released images of a fleet of four ships of China’s “People’s Liberation Army Navy” (PLAN) sailing near a U.S. Exclusive Economic Zone (EEZ) near Alaska’s Aleutian Islands. This comes at a time when China itself opposes any such activity around its own land or seas.

• India and Israel signed a deal to jointly develop next generation technologies and products such as Drones, Robotics, Artificial Intelligence and Quantum Computing

• The White House has no plans to shut down a disputed Great Lakes pipeline that brings some 500,000 barrels of crude oil from Canada into the U.S. each day, per spokeswoman. Michigan Gov. Gretchen Whitmer ordered the Line 5 pipeline to be shut down last year.
• Putin behind the Poland – Belarus Illegal Immigrant Border Crisis says Polish PM

• Market Futures are Lower ahead of Inflation Data 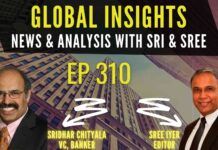