SpiceJet asked to repay Rs.62 cr taxes due by the Excise dept

SpiceJet has been sent a notice to pay up Rs.62 crore taxes due by the Excise department. The department also sent a notice to Yes Bank, which is the airline’s operating bank, asking it to freeze the account of the debt-strapped company, till such time the payment was not done by the company.

The Excise department has given SpiceJet time till April 7 to pay its dues, the same was communicated to Yes Bank as well.

The source also said that the department had also written notice to Yes Bank, which is its operating bank to freeze its account. “The letter was sent to SpiceJet and Yes Bank under Section 79 of the CGST and HGST Act, 2017, for recovery of dues. It is a standard procedure that the department follows in order to recover the dues.” The source added that other banks, too, may have received a similar notice.

An airline spokesperson said, “SpiceJet is in the process of discharging its current GST liability since October 2021 on regular basis. The company is already making payments as per a mutually-agreed payment plan. There is no freeze on any of our accounts which are operating normally.”

Apparently, over 45 days ago, SpiceJet had requested Rs.500 crore of a working capital loan from Yes Bank, which has still not been granted to the airline. 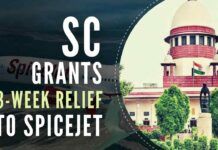