Finance Minister Nirmala Sitharaman’s husband Parakala Prabhakar again embarrasses her by ridiculing her economic policy and comments on the fall of revenue in the Goods and Services Tax (GST). This is the second time Finance Minister’s husband (estranged?) who is also an economist embarrasses her. In October 2019, Prabhakar wrote an article in ‘The Hindu’ newspaper on the chaos in Indian Economy, attacking his Finance Minister wife[1]. It was interesting that their daughter Vangmayi was working in ‘The Hindu’ newspaper at that time.

This time Nirmala invited the wrath of her husband for terming Corona Pandemic as “Act of God” by not transferring the GST revenue shares to the States. Apart from Parakala Prabhakar, many right-thinking people believe that Nirmala Sitaraman’s speech at GST Council was so bad and her suggestion to the States to borrow money was so atrocious.  On Thursday, husband Parakala Prabhakar tweeted against wife and Finance Minister Nirmala Sitharaman. He also quoted his October 2019 article in the tweet:

Real ‘Act of God’ is lack of coherent set of ideas in the govt to respond to macro-economic challenges. Covid is a late comer.
What I said in Oct ’19 on govt’s denial mode is vindicated by 23.9% contraction.
Do something at least now, for God’s sake.https://t.co/3S6ihU8EIe

Parakala Prabhakar (61) was Congress students’ wing National Student Union’s (NSUI) Unit President of the Jawaharlal Nehru University (JNU) in 1983. He fell in love with Nirmala Sitharaman (or vice versa) who also landed in the University to pursue her MPhil studies. Those days’ he was one of the backroom boys of the powerful Union Minister P V Narasimha Rao. His father was a Minister for 20 years in Congress Governments in Andhra Pradesh and his mother was a many-time Member of the Legislative Assembly (MLA) of Congress. Prabhakar was elevated as the National Vice President of NSUI till he left for London with his wife Nirmala in 1986 to pursue studies in the London School of Economics (LSE). He completed his Doctorate studies and returned back to India in 1991 when his mentor Narasimha Rao became the Prime Minister and was Officer on Special Duty (OSD) in the Rajiv Gandhi Institute for Youth Development. Later, in 1994 & 1996, he contested the Andhra Pradesh Assembly elections as a Congress candidate and lost. In 1997, he joined the BJP and contested from the Narasapur Lok Sabha Constituency in 1998 and lost there too. He also lost a Vidhan Sabha election in 2006. He was a spokesperson of BJP’s Andhra Pradesh unit for some time.

Meanwhile in 2003, during the National Democratic Alliance (NDA)-1 regime, Nirmala Sitharaman from nowhere was posted as a Member in the National Women’s Commission. Obviously due to the lobbying of husband Parakala Prabhakar, who was already in the BJP from 1997. In 2008, Parakala Prabhakar joined film star Chiranjeevi-floated political outfit Prajarajyam Party and soon after, he joined the Telugu Desam Party. Meanwhile, Nirmala was sighted around the BJP’s Delhi Headquarters as the former Prime Minister Vajpayee’s “official biographer” in late 2009. She could always be seen in Arun Jaitley’s office and by early 2010, she became an official spokesperson of the BJP. The rest, as they say, is history and we have seen the meteoric rise of Nirmala with the blessings of her Godfather, the late Finance Minister Arun Jaitley.

When BJP came back to power in 2014 at the Centre, Nirmala became a Union Minister and her estranged husband Parakala Prabhakar became the NDA-ally, Naidu Government’s Communication Advisor with a Cabinet Minister Rank. Eyebrows were raised when a National War Memorial contract of around Rs.250 crores was given to a Hyderabad based company NCC Ltd (earlier Nagarjuna Constructions) when Nirmala Sitharaman was the Defence Minister. After the Telugu Desam Party (TDP) left the BJP alliance due to allegations raised by Jagan Mohan Reddy, Parakala resigned from the Communication Advisor’s post.

The repeated criticism of Nirmala Sitharaman by her husband Parkala Prabhakar suggests that they are estranged. Otherwise, no loving husband will tweet against his wife. Their last united photo was a selfie after coming out from polling booth in Hyderabad after voting in May 2014 Lok Sabha elections. What could be the reason? Normally any sensible husband who is also a politician, of a lady who is Finance Minister and was also Defence and Commerce Minister will butter up his wife, regardless of the domestic problems. We don’t know why Prabhakar is embarrassing Nirmala. Only time will tell. 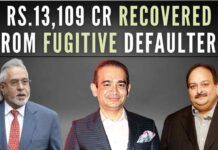 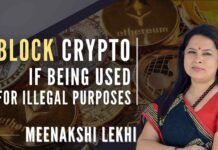 Tirupati Temple Board decided to audit its accounts and assets by...