Chief Minister Yogi Adityanath‘s journey of transforming Uttar Pradesh was full of challenges. Biographer and Political analyst Shantanu Gupta, has made waves with his bestselling ‘The Monk Who Became Chief Minister’, returns with a new title ‘The Monk Who Transformed Uttar Pradesh’: How Yogi Aditynath Changed ‘UP Waala Bhaiya’ abuse to a “Badge of Honour”, is published by Garuda Prakashan.

The book showcases Yogi Adityanath’s merit-based education system versus Akhilesh Yadav’s “cheating-based system”, his ‘One- District-One-Medical-College’ mission to his Covid management, the cultural renaissance of UP under his government, and finally how the duo of Modi-Yogi brought welfare for the poor in UP.

The book carries a foreword by TV Mohandas Pai, ex-director of Infosys and chairman of Aarin Capital.

Pai writes: “When Yogi Adityanath took over as CM, Lutyens Delhi — the name by which the power structure and supporters of the ancient regime are known — exploded in anger and derision. They questioned his capability to be CM, abused him roundly, and predicted the total failure of his regime. They forget that he was a 5-time MP, a person of great accomplishment as an MP going by his track record in Parliament, had toured most districts of UP and knew the living conditions of the people of UP more than any of his critics.”

The author, Shantanu Gupta, goes on to explain that governance under the SP and BSP governments institutionalized three things in UP’s politics — goonda raj, widespread corruption, and a high degree of nepotism.

“Corruption became part of the basic grammar of UP. All development indices of UP remained abysmally low during those years, apart from the crime numbers, which always soared. The only industry, which was getting benefited from Uttar Pradesh in those years, was Bollywood which drew inspiration for many of its criminal thriller sequences from UP, where Mulayam Singh Yadav had in-famously defended heinous rapists, saying — “Ladke Hain, Galti Ho Jati Hai” (Boys, do commit some small mistakes sometimes),” he writes.

My last book of Yogi Adityanath was largely about his life journey from being born in the hills of Uttarakhand to becoming a Nath Panthi saint, to becoming a parliamentarian and then taking oath as the CM of Uttar Pradesh. This book will take off from there and dive into his chief ministerial tenure,” writes Gupta in the book.

The arguments in the book are backed by hard facts — the massive administrative changes that Yogi brought in UP’s work culture, how he overhauled policing in UP, how he electrified a dark Uttar Pradesh with the motto ‘Sabko Bijli, Paryapt Bijli aur Nirbadh Bijli‘, how UP became an expressway state under Yogi’s regime and how industries, prosperity, and jobs are returning to UP under Yogi.

Having chronicled how Yogi changed the perception of Uttar Pradesh as an undeveloped, uneducated, corrupt, lawless, and ‘Bimaru‘ state to a transformed and progressive Uttar Pradesh, the author also showcases Yogi’s merit-based education system versus Akhilesh Yadav’s cheating-based system, the story of Yogi’s One-District-One-Medical-College mission to his Covid management, how Yogi’s massive pro-farmer steps rendered so-called farmer protests irrelevant, the cultural renaissance of UP under Yogi government and finally, how the duo of Modi-Yogi brought welfare for the poor in UP.

“Uttar Pradesh was disparaged as ‘Bimaru‘ and known for governance based on identity politics rather than all-around development, Sabka Vikas. Shantanu Gupta’s book is an important contribution to how an effective leader, rooted in India’s ancient ethos while looking for apt solutions for contemporary times, can bring real change,” says Sankrant Sanu, founder, and CEO of Garuda Prakashan.

Institutions like the World Health Organization (WHO), IIT Kanpur, Niti Aayog, and the Mumbai High Court praised Uttar Pradesh CM Yogi Adityanath over his COVID-19 management and the way the Yogi government handled the state in the first and second wave. In fact, Australian MP Craig Kelly was so impressed with Yogi Adityanath’s handling of Covid that he publicly requested for Yogi Adityanath to be loaned to Australia for some time to manage Covid in his country,” adds the author.

With an inhabitant of over 22 crores, Uttar Pradesh will go to the polls early subsequent year. 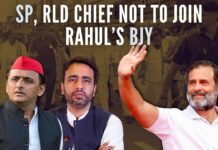