BJP is no longer a party with a difference, party workers have no importance in party, says Goa BJP Minister

Goa’s Ports Minister and BJP MLA Michael Lobo have accused the BJP Goa leaders of sidelining the followers of former Chief Minister late Manohar Parrikar. He said that the BJP is no longer a party with a difference, some powerful groups within the state BJP are sidelining the former CM’s followers.

“Chosen candidates of Parrikar are being sidelined by the party. There are some groups within the party who do not want Manohar Parrikar’s well-wishers, who want to take his legacy forward within the party,” he said.

After some section of the media reported that Lobo was being denied a ticket to contest the upcoming state Assembly polls in 2022, Lobo commented on the party’s scenario. Lobo has served as a BJP MLA from the Calangute assembly constituency since 2012.

Lobo has also been lobbying with the BJP as well as other political parties to field his wife Dellilah, from the adjoining Assembly constituency of Siolim.

After Parrikar’s demise in 2019, incumbent Chief Minister Pramod Sawant took over the office. Immediately after Parrikar’s death, his son Utpal also claimed that the party was no longer following the path laid down by his father.

“There are rumours that ML will not get a ticket and his wife wants to contest from Siolim. If the rumour is true, we will come to know. There are some persons at the party who want me, some who are in high places do not want to give me a ticket. They are scared of my shadow. Let the party clear the air,” he said, adding that he is in touch with leaders from other political parties namely the Congress, Aam Aadmi Party, and the Trinamool Congress. 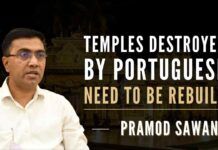 Indianisation of education is a must, can’t continue with colonial mindset: Venkaiah Naidu

Is Pak’s pappu getting help from Indian pappu on Kashmir?