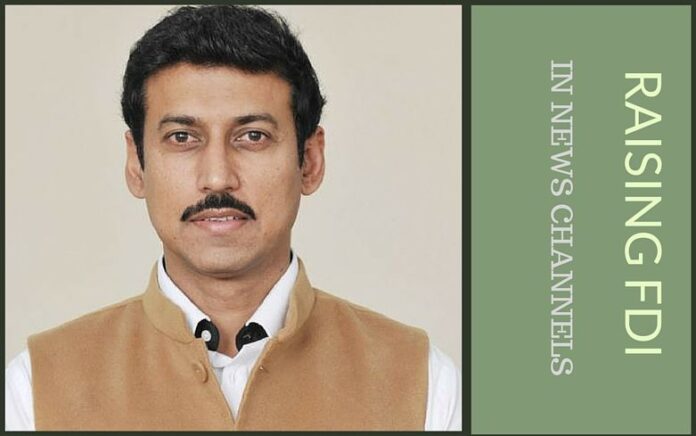 Speaking at the CII-organised Big Picture Summit here, he said that while the government is considering “bringing in more” foreign investment, he “can’t really say that we are going to make it happen in a given timeframe, but the very fact that we have started thinking about it, means we have started moving ahead with it”.

“Unfortunately, because of that (lack of investment), there is not much investment happening in training of the journalist.

“[dropcap color=”#008040″ boxed=”yes” boxed_radius=”8px” class=”” id=””]W[/dropcap]e need to have very good quality news being given out. And therefore there is need to investment into the quality of journalism itself,” said Rathore.Currently, foreign direct investment (FDI) of upto 26 percent is allowed in uplinking of news and current affairs TV channels.

Rathore said government policies would be supportive and calibrated to enhance the modernization and monetization of the media and entertainment industry.

“In phase II of the auction of the frequencies for the radio, there was no provision for broadcasting news. This was changed during the phase III auction, when private radio was allowed to broadcast the news of the All India Radio for a specified time,” he said, hinting that the government was considering the demand of private broadcasters to have news bulletins.

Addressing the summit, Special Secretary, Information and Broadcasting, J.S.Mathur said that the Prasar Bharti board has recently decided in principle to outsource various slots in Doordarshan to private parties to enhance quality and monetization in the media.

The details of the proposal are being worked out and would be finalized soon, he said.

Nepal imposes ban on imports of luxurious items to save foreign...