[dropcap color=”#008040″ boxed=”yes” boxed_radius=”8px” class=”” id=””]T[/dropcap]o attract investment for the state, Haryana is going ahead with the ‘Happening Haryana Global Investors’ summit despite putting behind the mindless violence unleashed during the Jat protests for job quotas.

“A fortnight before the summit dates the widespread violence happened with their fingers crossed as the Chief Minister Manohar Lal Khattar and others involved in the March 7-8 investment exercise”, Well-placed sources in the BJP government told IANS.

A senior Haryana bureaucrat told IANS, “Haryana’s image as an ideal investment destination has taken a big hit, the police and administration failing to control the situation as the shops, businesses and other institutions targeted by mobs”

The officer said, requesting anonymity, that the violence will definitely put off a lot of investors. Eventual outcome in terms of actual investment on the ground about the summit everyone are keeping their fingers crossed. And Japan has proposed to become a partner country in the summit despite the nine days of unrest and violence.

This was telephonically conveyed to chief minister, Finance and Industries Minister Abhimanyu said.

He claimed that people of the state wanted to ensure the safety of the industries even during the violence.

“When the law and order situation in the state was disturbed, people protected the industries and drove away miscreants,” the minister said, trying to build confidence among future investors.

[dropcap color=”#008040″ boxed=”yes” boxed_radius=”8px” class=”” id=””]A[/dropcap] number of Japanese and South Korean companies have invested in Haryana, especially in the Gurgaon-Manesar belt. The first big name to establish base in Haryana, Maruti-Suzuki, piloted by Japanese car maker Suzuki, was a runaway success in automobile sector.

Khattar has announced that 12 countries would participate in the first ‘Happening Haryana Global Investors’ Summit 2016′ being organised in Gurgaon on March 7 and 8. The summit is being organised by the Haryana government in association with Confederation of Indian Industry (CII).

Khattar, who is hoping that the summit will be a “historic event”, is keen that more investment comes to the state.

Besides Japan and China, which he visited in January, Khattar travelled to the US and Canada last year. He did investment road shows in Kolkata, Chennai and Mumbai too in the past two months.

“More than 800 entrepreneurs from India and other countries are expected to participate in the summit. Representatives of 140 foreign companies and diplomats will also attend.

“We are confident that the investment target set in the summit would be achieved,” Abhimanyu said.

Union Finance Minister Arun Jaitley will inaugurate the two-day event on March 7. A number of union ministers are expected to attend.

But not everyone is hopeful.

“Many investors will develop cold feet after the recent violence. The Khattar government literally abdicated its responsibility. There was no administration. It was utter lawlessness,” Rajinder Saini, a businessman who suffered losses in the violence in Rohtak town, told IANS.

Trade and industry body Assocham projected the loss in the violence at around Rs 20,000-crore [$2974.75 Million]

Following the violent incidents and its aftermath, the Haryana government cancelled the ‘Parvasi Haryana Divas’ that was to be held with the summit on March 9.

“Rohtak town, 70 km from Delhi, suffered the brunt of the violence blamed on Jats with scores of buildings, shops, malls, hospitals, educational institutions and vehicles set on fire and extensively damaged.

Rohtak, Sonipat, Panipat and Jhajjar districts were the worst hit by the violence. Other affected districts included Bhiwani, Hisar and Kaithal.

Here is an information on Jat reservation agitation 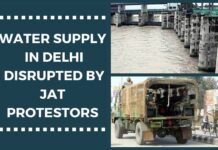 Coinbase lays off around 1,100 employees amid turmoil in crypto market

SEBI to strengthen Mutual Fund norms. Winding up of schemes only...