No Means No Campaign in Himachal Pradesh to halt hydropower dams

The inhabitants of Himachal Pradesh‘s Kinnaur on Sunday demanded an immediate halt on hazardous hydropower dams in the “fragile and overexploited” Himalayan region.

This comes a few days after Prime Minister Narendra Modi committed to a reduction of carbon emissions by emphasizing various initiatives, including hydel projects, in the Glasgow Climate Summit.

The youth of affected panchayats from Kinnaur have collectively sent a message to PM Modi that bumper-to-bumper dams have been built in the Himalayan region and that has led them currently to their struggle, not for electricity, but their existence.

The organizers of ‘No Means No Campaign‘ along with Kinnaur and Lahaul Spiti Ekta Manch said, “We are concerned with this issue. There is global warming which requires action from one platform but the necessity for power is now going to be met by solar, and wind energy and in this, hydel projects are also being touted as ‘clean and green’.

The protesters further alleged that the unprecedented surface and underground construction have not just disturbed the rugged slopes but brought about irreversible land-use changes in an earthquake and landslide-prone zone, adversely impacting the lives and livelihood of the local Kinnaur indigenous community.

The protesters said, “The gram sabhas of affected villages of proposed projects in Kinnaur have already passed resolutions to halt further hydropower construction. They are standing up for their own survival, to preserve their identity, their homeland. And we stand in solidarity with their demand for halting all future hydropower projects in this vulnerable Himalayan region which has been exploited well beyond its capacity. A tiny district like ours is already contributing 3000 MW to the state now, which is why we are demanding a ban on further hydropower in our region.”

There are several projects coming up in the region. More than 20 projects are in the pipeline even as four big hydro projects are still under construction.

The new spate of constructions is planned in altitudes above 3,000 meters going up to the trans-Himalayas.

The said regions are reeling under the impact of the climate crisis, with glacial melts, cloud bursts, avalanches, and flash floods.

Kinnaur’s neighboring district Lahaul-Spiti will also see more than 50 projects with a capacity of 3,000 MW on the Chenab River and its tributaries.

Now the tribal people are calling out this “illegal and mindless destruction” and saying #NoMeansNo. The areas of Kinnaur and Lahaul-Spiti have laws to protect their biodiversity, they added.

Himachal Pradesh has set up 10 large and 12 small hydropower projects amounting to an installed capacity of 3041 MW, along with 11 transmission lines in one of the most ecologically sensitive and geologically vulnerable Kinnaur district.

Recently, Himachal has witnessed many landslides caused by heavy and incessant rain. This monsoon, Kinnaur witnessed a spate of catastrophic landslides that took the lives of tourists as well as the local populace. 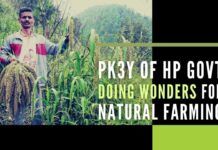 Vote Now: Mood of Public before counting starts on 18 December

Polish firm to set up $50 mn plant in Karnataka