In a further twist to the Zakir Naik saga, Hindraf, a non-governmental organisation working for the human rights of Malaysian Hindus of Indian origin, is all set to file the first-of-its-kind Public Interest Litigation in Malaysian courts next week to compel the government to expel the televangelist Islamic preacher from the country on grounds of delivering lectures and sermons that threaten national security.

The Indian Government has zeroed in on 78 bank accounts with transactions of crores of rupees and investments in properties valued at over Rs.100 crores…

Naik is an exponent of Salafism, an ultra-conservative branch of Islam often at odds with other Islamic sects, particularly Shiism. Interestingly, his teachings have also upset prominent Sunni seminaries such as the Deoband Darul Uloom.

Earlier this month, Hindraf lawyer, Karthigesan Shanmugam, served notice on the Deputy Prime Minister & Home Minister Dr Ahmad Zahid bin Hamidi, asserting out that the peaceful co-existence of Malaysians was at risk from any undesirable activities of Zakir Naik. The preacher has been banned from several countries and is wanted in India for alleged links with terrorists and money laundering activities.

The Indian Government has zeroed in on 78 bank accounts with transactions of crores of rupees and investments in properties valued at over Rs.100 crores; his Islamic Research Foundation has been banned under the Unlawful Activities (Prevention) Act, 1967. Its foreign funding is also under investigation. Naik’s proximity to alleged ISIS recruiters is under investigation in Kerala and Mumbai.

The PIL has been precipitated by reports that Zakir Naik conducted Friday sermons (Feb. 17) in a Masjid in Arau, where he was allegedly hosted by the Perlis Islamic Religious Affairs, Malay Customs Council and the Office of Perlis Mufti.

Hindraf chairman, P Waytha Moorthy, a former Deputy Prime Minister, who came under attack from the Mufti for speaking against Naik, has urged the Home Minister to answer public concerns regarding Naik, who is “openly promoting terrorism, denigrating and ridiculing members of other faiths”. Moorthy argues that “Naik is extremely dangerous to community cohesion, religious tolerance and race-relations”. He questioned the logic of harboring Naik in Malaysia when he is deemed a national security threat in many countries, including UK, Canada, Bangladesh and others.

The letter to the Prime Minister cites the Judgment by the Court of Appeal in the United Kingdom, Case No: C4/2010/2913) Neutral Citation Number: (2011) EWCA Civ 1546, which upheld the decision of the UK authorities to deny him entry into the country. The judgement cited several statements by Zakir Naik, which were considered as “Unacceptable Behaviour”, along with certain reports said to provide “further context to the influence statements made by Dr Naik previously had on those engaged in terrorist related activity”.

Moorthy’s letter to the Inspector General of Police queries if the Internal Security and Public Order Department of the Royal Police Force has evaluated the risks involved in Naik’s presence in Malaysia.

It is fairly clear that Naik has openly condoned terrorism. Moorthy warns that Naik has a manipulative mindset aimed at radicalising and instilling terrorist ideas, and this is evident from the confessions of the Dhaka bombers who massacred 20 hostages at a popular café on July 1, 2016, that they were influenced by Zakir Naik’s speeches.

Moorthy’s letter to the Inspector General of Police queries if the Internal Security and Public Order Department of the Royal Police Force has evaluated the risks involved in Naik’s presence in Malaysia. It specifically asks if the Counter-Terrorism unit has completed its findings on the possibility and likelihood of Naik radicalising /motivating and inspiring Malaysian Muslim youths and/or the over one million Bangladeshi and Indonesian migrant workers in Malaysia.

Further, it demands to know if the Royal Police Force has communicated with the security services in India, Pakistan, Bangladesh and the United Kingdom for information and details of Zakir Naik’s alleged involvement in terrorism-related activities as well as money laundering. The Malaysian authorities have been asked to explain if investigations have begun on whether Zakir Naik has encouraged any suspected terrorist cells operating internationally to shift base to Malaysia, which may be seen as a safe haven.

This question is relevant in the light of previous reports that Naik had shifted his operations to Nepal last year, before he suddenly appeared in Malaysia. His unwillingness to return to India after first stating that he would do so raises strong suspicions that he may be up to something sinister.

Meanwhile in India, the Enforcement Directorate has, with the arrest of Naik’s chief financial officer, Aamir Gazdar, followed the money trail to Pakistan and the D-Company.

In this connection, it is pertinent that the online portal of Perlis Mufti has made some malicious, seditious, and criminally defamatory accusations against Waytha Moorthy, which have attracted extreme views from the Muslim community in Malaysia, who seem to be confusing issues of national security with Moorthy allegedly defaming the Islamic faith. There have been thinly veiled threats to the non-Muslim community in Malaysia to the effect that the “same treatment of non-Muslims in Iran, Pakistan or Saudi” could be imposed in Malaysia.

This reaction reinforces the contention that Malaysian Muslims are vulnerable to Zakir Naik’s preaching even as he subtly and tacitly promotes, encourages and radicalises youths in a manner detrimental to public order and the peaceful co-existence of multi-racial Malaysia.

As an example, Moorthy cites how Zakir Naik specifically targets groups that consume pork:
“The pig is the most shameless animal on the face of the earth. It is the only animal that invites its friends to have sex with its mate. In America, most people consume pork. Many times after dance parties, they have swapping of wives; many say, ‘you sleep with my wife and I will sleep with your wife.’ If you eat pigs, then you behave like pigs”. [Referred to in Western Mail August 2006; also cited in the UK judgment mentioned above]

Hindus do not generally consume pork, however, Moorthy asserts, they have the moral duty to speak up for Christians, Buddhists and others who would be deeply hurt by the insulting teachings of Zakir Naik. The speeches are calculated to create feelings of hatred and contempt for non-Muslims worldwide. The Malaysian Prime Minister should also direct all religious leaders to refrain from issuing any statements which would aggravate the current situation in the country.

Meanwhile in India, the Enforcement Directorate has, with the arrest of Naik’s chief financial officer, Aamir Gazdar, followed the money trail to Pakistan and the D-Company. Some businessmen in Karachi, known to be close to Dawood Ibrahim, has reportedly moved large sums of money into the accounts of the Islamic Research Foundation, and this could potentially be one of the largest hawala rackets in India.

Understandably, Naik shows no inclination to return to India. 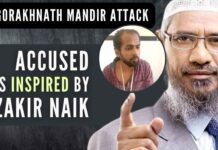