[dropcap color=”#008040″ boxed=”yes” boxed_radius=”8px” class=”” id=””]H[/dropcap]uman rights activist and prominent lawyer Nandita Haksar has claimed that there is a huge gap between Kashmiris and Indians and that India and Pakistan have not taken into account the Kashmiris.

“The gap between Hindus-Muslims, India-Pakistan and Kashmiris-Indians is growing,” Haksar told IANS in an interview. Haksar was reacting queries on her new book “The Many Faces of Kashmiri Nationalism — From The Cold War To The Present Day (Speaking Tiger, pp 335, Rs.350).

She said she was prompted to write after meeting people who did not fit in the normal discourse in Kashmir.

The two main protagonists of the book being Sampat Prakash – a Kashmiri Pandit and communist trade union leader and Muhammad Afzal Guru, the militant who was hanged in Tihar jail in 2013 for his role in the 2001 Parliament attack.

Haksar’s previous work includes the book “Framing Geelani, Hanging Afzal” in which she had boldly said that “Afzal did not get a fair trial.”

When asked about the idea of inclusive Kashmir, she said, “The issues of religion and nationalism need to be sorted out in the Valley. Maybe there is distrust within the Kashmiri community. As there were lot of Kashmiri pandits working for Intelligence agencies”.

Excerpts from the Interview

Q. You had already written a book about Afzal Guru. What made you write again on the somewhat same topic?

A. I was a full time human rights lawyer at that time. I wrote that book as that was my profession, interest and passion. During that discourse, in Kashmir, I was able to see the complexities of the Kashmir question. And I saw that there is a wide gap, the gap between Kashmiris and Indians. It kept nagging me and it disturbed me.

The gap between Hindus-Muslims, India-Pakistan and Kashmiris-Indians is growing. Sampat Prakash (the main character in the book) who is a Kashmiri pandit does not look upon himself as victim. He did not victimise himself. He continued to fight and stayed back.

There were Kashmiri Muslims who did not support either India or Pakistan. Also, they did not agree with the idea of militants. And their stories were not being told. They were suppressed and undermined.

Like Afzal says in his letter to me that he was fed up of Indian and Pakistani nationalism.

Q. In the same letter, Afzal had written to you that the Kashmir conflict is not an ‘Islamist conflict”. Do you think it is?

A. No. Even an extreme thing like IS basically say we are against occupation of our countries.

The Kashmir conflict is rooted in the fact that India and Pakistan have not taken into account the Kashmiris when they talk about it. It has nothing to do with Islam. But now it is getting a religious color. Lots of books are saying from Nationalism to Islamic movement, Why?

There is an element of pan-Islamism, political Islam in it. But the basic root is the denial of certain basic rights and undermining of basic aspirations.

Q. Do you believe that Kashmiris did not help Afzal Guru? The separatists rather?

A. I do not believe that. Kashmiris saw the campaign we did for Afzal. I worked through the trade union not through the political parties. Apparently, money was sent to him but it was diverted to something else. It was not given for his lawyer.

Q. You said that Afzal did not get a fair trial. Were there any other political issues?

A. By the time Abdul Rehman Geelani was acquitted, there was an enormous pressure on the state. They just did not know how this happened. Also, BJP had made it an issue and it became a major platform for BJP.

There were people pulling in different directions, even in our group. There was a division in our own civil society group.

Q. Are you not on good terms with Syed Abdul Rehman Geelani, for whom you fought?

A. I do not appreciate his politics and criticism. He felt that mercy petition was something that Afzal did not want. Afzal had to send the petition, not me. It had to go through jail. (He Though) I was speaking on India’s behalf. He is from the generation which has been brought up in this discourse.

A. No, I am not content at all. I would love to know more and write more. 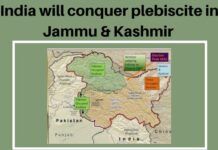 India will conquer plebiscite in Jammu & Kashmir hands down

Just as we had predicted in an earlier article today, Indian...