For me what is important is that we penetrated Pakistani airspace, dropped 1000 kg bomb, fired missiles on Pak territory and returned unscathed.

For me what is important is that we penetrated Pakistani airspace, dropped 1000 kg bomb, fired missiles on Pak territory and returned unscathed. It was for the first time since 1971 that we had intruded Pak air space. We conveyed the message to Pakistan that henceforth we will not be sitting on our haunches if there are terror attacks on our soil. We will enter Pak territory real deep and hit back. Most importantly we have conveyed the message that we will not be deterred by Pakistan’s nuclear weapons.

The ISI with its members from serving and retd officers of the Pakistani defense establishment, is much more than an intelligence body; it is a vast self-serving mafia business empire which derives its enormous profits from drugs, terror, so-called jihad, contract killing and worse.

Operation Balakot is a game-changer in that it is for the first time the impotency of a nuclearly-armed state has been exposed.

The other significant take away is that Indian diplomacy worked beautifully to put pressure on Islamabad to release braveheart Wing Commander Abhinandan. The decision to free him could not have been taken by Imran Khan without the concurrence of the ISI, which is the final arbiter in Pakistan. The ISI had no choice because the pressure from Washington, Paris, and London at the instance of India was too much for it to handle. The vulnerability of the ISI, which is a deep state within Pakistan, was exposed as never before.

The other interesting aspect is Iran’s unprecedented stern warning to Pakistan. Now Pakistan risks retaliation from Tehran if it does not shut down the terror factories. Surprisingly  China too effectively remained neutral despite its considerable stake in Pakistan. Maybe it risked isolation in the wake of massive international condemnation of the horror of Pulwama.

Most interestingly the Balakot mission was described by Modi as a pilot project (I thoroughly enjoyed the pun). He has warned Pakistan of more strikes if it embarks on any misadventure. He is asserting this with confidence because the White House and the West have extended their full support to India. He has walked the talk once. I won’t be surprised if he does it again…with more vengeance.

I don’t care if he is doing all these with the elections in mind. What is important is that our country is benefitting from his stance, which incidentally has been carefully crafted by India’s most cerebral and at the same time operations-oriented NSA Ajit Doval.

The next step should be to target the ISI as distinct from Pakistan. The ISI is much more than an intelligence body; it is a vast self-serving mafia business empire which derives its enormous profits from drugs, terror, so-called jihad, contract killing and worse. Its members, both serving and retd officers of the Pakistani defense establishment, have assets worth billions of dollars within Pakistan and abroad. It behaves like a State without the responsibility that status entails.  The destruction of the ISI is necessary to tackle terrorism globally. The need is for a global alliance against the ISI. The biggest beneficiaries will be the people of Pakistan themselves. And, of course, we will benefit big time by the decimation of THE organization which is responsible for the continued violence in Kashmir. 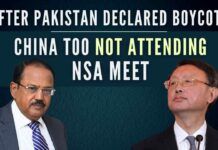 After Pakistan, China is also not attending India chaired National Security Advisors meet to discuss the situation in Afghanistan 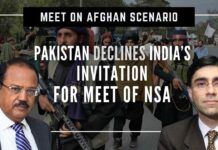 How will BJP recreate the 2014 magic?