The posture of Nataraja leaves much for contemplation, leading to the self-realization of why we are here and when we will get relief and release from the imposing cosmos enveloping all around us.

The dance of Shiva on the night of Maha Shivaratri is perhaps the best-conceived idea of the ancient Vedic wisdom of how the cosmos moves. Our existence just being part of the smallest of the smallest fraction of the entire cosmos hypothesized by modern science, the scientists know how difficult it is to acquire a bird’s eye view of the entire cosmos. Interestingly that is what Vedic sages have achieved and immortalized into the Dance of Shiva, popularly understood in the form of Nataraja. They have even identified a day, rather a night for that dance – that is the 14th night before a complete blackout of the Moon. That night is Shivaratri coming month after month but the one coming in the month of Maagha is celebrated as Maha Shivaratri – a time marked for universal dissolution.

The Dance of Nataraja has captured the imagination of scientists too as a symbolism of dance of subatomic particles – the proof of it in the display of a 2-meter tall statue of Nataraja standing in front of CERN in Geneva.

Skeptics may dismiss this as an untenable tenet of a religious myth thriving on fear psychosis of hapless mortals, but what is hidden behind the posture of Nataraja leaves much for contemplation, leading to the self-realization of why we are here and when we will get relief and release from the imposing cosmos enveloping all around us. The perfect setting for this is a night before complete blackout – that is perhaps why the 14th night before No-Moon is chosen. Among the months, none other than Maagha is suitable as the new month starting after No-Moon is Phalguna that heralds the start of spring with the return of Kaama (Holi festival) and marriage of Gods.

Having chosen a perfect day, our seers have laid out certain axioms that describe the nature of cosmos. The oft-repeated ones are

The crux of all these is that the infinite number of worlds are all happening within the ‘womb’ of that Being whom one may call by any name but what is implicit is that the Being Himself / Itself is unfathomable for the very fact we are talking only about the womb that is home for the cosmos. The entire body of the Being can never be known.

A more specific axiom comes from the 3rd and 4th verses of Purusha Sukta giving an idea of the proportion of created worlds. These verses say that only one-fourth of this Being is manifest as created worlds while three-fourths are always unmanifest.

Combining all these together, we can conceive only a circular formation capable of fulfilling all these axioms. This is also conceptualized as ‘Brahma Chakra’ in Shvetasvatara Upanishad. Such a model will have an infinite number of universes revolving in different layers of in circular orbits,  stretching vertically one above the other and laterally one beyond the other. Only in this kind of formation, the worlds can be truly infinite and endless.No one can say where the beginning point of this lies or where this will end.

Within this chakra, life thrives and even gets trapped. It is in the event of a realization that one is getting trapped in this chakra, Vedic wisdom comes to our rescue to understand where we stand, what we are and what to do to escape from this chakra. This is what a person is expected to ponder on the occasion of Shivaratri. Such pondering inevitably leads us to think of the Universe – the stage where creation and dissolution are happening relentlessly. And the Dance of Nataraja presents a wholesome idea of how the Universe exists.

The Dance of Nataraja has captured the imagination of scientists too as a symbolism of dance of subatomic particles – the proof of it in the display of a 2-meter tall statue of Nataraja standing in front of CERN in Geneva. But Vedic concept views this dance at a macro level, not at the sub-atomic level. This dance posture follows the combined force of Shiva and Shakti as seen in Shiva- Shakti Yantra having two equilateral triangles placed one on the other in opposite directions and inscribed inside a circle. 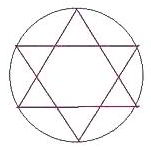 The macrocosmic feature in Nataraja is seen in the top two hands, the right hand beating the Damaru (Drum), symbolizing the birth of sounds giving rise to the birth of worlds and the left hand holding Agni (fire). Modern science postulates birth of worlds from Big bang, but Nataraja concept indicates sound as the causative or an indication of creation.

The distance between the hands fulfills the major axiom of Purusha Sukta of 1:3 division of the cosmos. In the picture below this distance covers one-fourth of the circle concurrent with the axiom that only one-fourth of the Being is manifest. From the point in the circle identified by the Drum beating right hand, the visible Universe starts.  In other words, the particles get manifest at this point of Brahma Chakra also known as Kala Nemi whereby time starts ticking. Particles keep moving and give rise to the cosmos we see. When they reach the point of Agni in the left hand – by then covering 90 degrees of the circle (1/4th of the entire cosmos) – dissolution happens. Beyond this, they are unseen or un-manifest. The above figure shows the region between the two hands as the existing and manifest Universe. Beyond this, particles become invisible. They keep moving continuously in this formation but will be undetectable. It is like resting time or sleep time of Brahma in that particular segment.

We keep on taking birth again and again, bound by the deeds we do. Imagine the birth cycle is yet to continue but the Universe had gone into a switched-off mode for the 3/4th duration; then what would be our status?

For the next half of the duration, there is no movement in Nataraja. This symbolizes complete non-active phase or non-manifestation but where the cosmos anyway keeps moving.

Once the last quarter is reached, activation is indicated by the lifted leg and the two hands in Adhomukha (downward) and Urdhwamukha (upward) mudras indicating a struggle between opposing forces. Once that quarter is crossed, it is streaming in of particles in manifest form triggered by the sound of the drum. This concept is depicted in the diagram below. This formation fulfills all the creation axioms of Vedic Thought. Only one fourth is manifest. The Navel of Nataraja signifying the pivotal axis, all the worlds move in circles one above the other vertically and one beyond the other laterally without any limit.

In this formation, an infinite number of parallel Universes can exist without upsetting or overlapping with any other. There is perfect order in this system with each universe moving with its own set of laws of physics governing it. This formation thus fulfills modern scientist’s idea of parallel universes but without a time warp. In this formation, manifestation identified with creation is governed by the Four-faced Brahma. Throughout the segment above and below and beyond, numerous Brahmas are always born as guardians of creation. The middle segment is the region governed by Vishnu, the Sustenance-giver. Once the worlds reach the end of the quarter, the fire in Nataraja’s left hand exists infinitely and eternally above and below and throughout at that juncture. No one can see the top or bottom of the Firewall here – a feature that is woven into a legend of Brahma and Vishnu not being able to see the crown and feet of Shiva – the core legend of Maha Shivaratri! In the above figure, the manifest zone is the visible Universe. Every strand in this zone in the figure represents a Universe. We are moving along with our Universe and will someday reach the wall of Fire of Shiva from where there is no scope for manifestation as worlds and life until we cross the remaining three-fourths of the path.

We keep on taking birth again and again, bound by the deeds we do. Imagine the birth cycle is yet to continue but the Universe had gone into a switched-off mode for the 3/4th duration; then what would be our status? We would also be traveling along the Universe in mute form until we reach the creation zone. It is for this reason Maha Shivaratri is remembered that we shed our karmic bond as quickly and as early as possible.

The only good news is that we have just crossed the halfway mark of the creation zone. If people can recall the Sankalpa mantra, our location in space and time is identified as ‘Dwiteeya Parardha’ –meaning ‘second half of Para’

In Sanskrit, the current age of our universe is given in Half-life of Brahma – much like how modern science identifies the age of radioactive substances in half-life!

Para is the time of the Manifest zone (one-fourth duration). Half the time is gone means we are right on top of the crown of Nataraja as in the figure below. Vedic Thought has calculated the duration of this Para in terms of age of Four-faced Brahma. It is 100 years for which the basic unit is the solar year. 864,00,00,000 solar years make one day of Brahma. Reckoned from the date of Big Bang this means only one day of Brahma has gone so far and we are now in the 2nd day. But according to Vedic Thought, we are on the first day of the 51st year of Brahma!

This cannot be dismissed as fantasy or figment of imagination for there are huge numbers mentioned in our texts including Tamil Sangam texts. Tolkāppiyam, the ancient grammar book of Sangam age has a sutra on how to identify huge numbers by means of end letters such as ‘ai’, ‘am’ and ‘pal’ (1-393). Six such numbers find mention in Paripaadal, a Sangam age text to refer to the duration of birth of the universe and different stages of dissolution. (verse 2: lines 13 &14).

In Sanskrit, the current age of our universe is given in Half-life of Brahma – much like how modern science identifies the age of radioactive substances in half-life! The current age is Parardha – half of Para (age of Brahma). This is much like the use of Parsecs for huge distances, but Vedic Thought gives in Time Units!

Parardha is equal to 10^17 years. We are on the 1st day of the 2nd Parardha. The manifest zone had 2 Parardhas while the entire circle has 8 Parardhas. It is here Vedic wisdom gives a hint to work out the entire duration of the cycle of our Universe as 8 X 10^17 years.

Maha Shivaratri was designed by Vedic rishis to remind ourselves whether we should allow ourselves to get trapped within the circle of Universe for 6 full Parardhas or work our way out within the remaining Parardha of creation zone, which by itself is segmented into a cyclical repetition of sleep and activity every 4.32 billion years.

Dr. Nagaswamy exposes the falsehoods in the Tamil language being “different” narrative 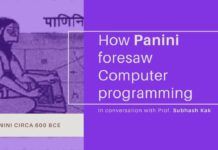 Prof. Subhash Kak on how Panini made Sanskrit powerful. 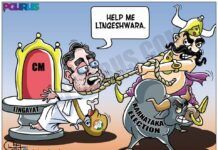 Karnataka Election: Praying to God only during troubled times