Banaras Hindu University (BHU) doctors’ team at their Department of Cardiology of Institute of Medical Sciences, saved the life of a 35-year-old woman who was suffering from rare heart disease on Saturday after performing a challenging angioplasty operation on her in the nick of time.

A team of the department led by the Head of Department Prof Om Shankar saved a precious life on Jan 29, 2022, of a 35-year-old woman who was suffering from a rare heart disease.

Prof Om Shankar, who led the doctors’ team, said that the woman, a resident of Azamgarh, was referred to him on Thursday after an angiography of her was done in a private hospital. The woman’s angiography revealed that the main artery of her left side of the heart was narrowed like the thread-like structure, said Prof Shankar.

Prof Shankar said that the woman, who came from Azamgarh, was in such pain that she could barely walk a few steps without suffering an unbearable chest, jaw, and upper limb injury.

“The young lady never consumed tobacco. She had no hypertension, diabetes, or Takayasu disease. She had even not had any family history of cardiac disease. But her angiography revealed that the main artery of her left side of the heart was narrowed like the thread-like structure, which was a complicated condition,” said Prof Shankar.

He said this type of heart disease is considered to be the most serious and such people can die of sudden death due to cardiac arrest at any time. “However, we decided to do angioplasty on her, which was a challenging task. The condition of the artery was very difficult to negotiate through the wires. Then the position and alignments of the blood vessels were so complex that it was complicated to determine where to place the stent? Even slight mistakes in this procedure could lead to the death of the patient within minutes,” said Prof Shankar.

After a lot of brainstorming, the team decided to conduct angioplasty on her, which was a really challenging task. The condition of the artery was difficult to negotiate through the wires. Then the position and alignments of the blood vessels were such that it was also quite a task to determine where to place the stent? Even a slight mistake in this procedure could have cost the patient’s life within a matter of minutes.

The narrowed vessel was opened up by inserting a needle into the hand artery with wires, balloons, and stents. He said that immediately after angioplasty patients became fully fit, they did so without incisions and only at a cost of Rs.50,000. 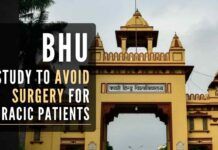 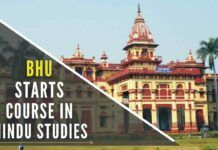 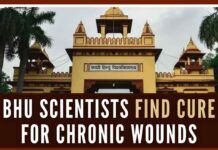 Scientists from BHU find cure for chronic wounds; patients with diabetic foot to be benefitted

Ayush Ministry signs agreement with WHO for global centre of traditional...