Conversation with Dr. Prakasarao Velagapudi on his book Reviving Hinduism and on the alleged misuse of power by an Endowment Officer in the Tirumala Tirupati Devasthanam (TTD), Tirupati.

Dr. Velagapudi has written to the Minister of Endowments, Andhra Pradesh about this. A copy of the transcript is shown below:

Dear Sri Manikyala Rao Garu:
Sub: Snehalata, a Christian working at TTD
Namaste.
It is disturbing and unacceptable to have Christians working in Hindu religious institutions. I want to request your immediate attention to investigate and take appropriate action against Snehalata, Deputy Commissioner at TTD. I have seen the video. She does not even wear Kumkum on her Forehead.
She should be immediately transferred to another Department before she converts more people, before she insults the Kaliyuga Daivam for Hindus, and insult the sentiments of millions of Hindus across the globe.
Many buses, vans and cars with Jesus Christ photos are going up the Hill to Tirumala. At the check point, any bus or car with Jesus photos should not be allowed to Tirumala. They should be STOPPED at the entrance.

We should set up PHONE number (800 Number) to receive calls from public who may be aware of CHRISTIANS working in the Endowment Department. Department may not be equipped to identify the employees as either a Hindu or non-Hindu.
We can also request the PUBLIC to send photos and / or videos of these employees going to church. We should also request the public to report any conversion activities being conducted by Department officials or any official allowing missionaries on the Temple premise We can also encourage them to video these people going to church.
Based on these calls we should act immediately. Any complaint from the Public should be investigated within 3-5 days and should act. Otherwise they will keep converting more and more people and use Hindu devotees’ money to convert Hindus into Christianity.

Since the Department may not know who are the Christians working in the Endowments Department, this is one way of tracking these people. We also heard that Sri Sailam Temple was closed on New Year’s day because the EO is a Christian who went to the mass at midnight.
DEVELOP GUIDELINES: We should be able to fire the employees who do not declare themselves as Christians if they are working for Hindu Religious Institutions.
If an employee declared his faith as Hindu at the time of employment, we should make it mandatory for those people to form the Endowment Department if they are converted to other religion. If they do not inform and found going to church and engage in proselytization, those employees should be fired immediately.
Also, if we have any evidence of Christian employees converting other employees during their employment, they should be fired.

Implement GO # 21 issued on May 24, 2007
The GO says, “The Government with a view to maintain public order, tranquility and serenity of a place of worship or prayer, prohibit propagation of a religion other than the religion traditionally practiced st such place, by words, either spoken or written or signs or by visible representation or distribute any printed material or other forms of religious literature … Whoever contravenes the provisions contained in section 2 shall be punished with imprisonment which may extends to three years or with fine upto Rs. 5,000/- (Rupees five thousand) or with both.”

We request to implement and imprison Snehalata to a maximum of three years immediately.
Also, we request you to investigate the religious background of all employees and imprison them if they found to be other than Hindus.

I would appreciate your action forthwith. 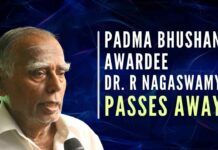 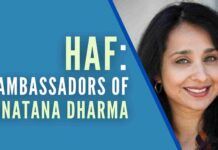 Suhag Shukla, Executive Director and Co-founder of HAF on being Ambassadors of Sanatana Dharma