India, US to join working group in Defence Industrial Security

India and the United States have decided to set up a joint working group on industrial security to facilitate deeper collaboration on cutting-edge technologies. The in-principle decision to set up the group was taken at the five-day Indo-US Industrial Security Agreement (ISA) summit that concluded on Friday, officials said. The summit, held in Delhi, was aimed at developing a protocol for the exchange of classified information between the defence industries of both nations.

Major US defence firms were pushing for a framework to ensure the safety and security of critical technologies and classified defence information when they are shared with the Indian private sector. The ISA was signed in December 2019 to facilitate the exchange of classified information between the defence industries of both countries. “During the summit, both the sides agreed in principle to establish the Indo-US Industrial Security Joint Working Group,” the Defence Ministry said.

India and US also signed COMCASA (Communications Compatibility and Security Agreement) in 2018 that provides for interoperability between the two militaries and provides for the sale of high-end technology from the US to India.

“This group will meet periodically to align the policies and procedures expeditiously that will allow the defence industries to collaborate on cutting edge defence technologies,” it said in a statement. The summit, held to create a roadmap for the implementation of the ISA, was co-chaired by Designated Security Authorities (DSAs), Anurag Bajpai and David Paul Bagnati, from the Indian and US sides respectively. “The DSAs also visited the Indian defence industry in preparation for the roadmap,” the ministry said.

The Indo-US defence ties have been on an upswing in the last few years. In June 2016, the US had designated India a “Major Defence Partner”. The two countries have also inked key defence and security pacts over the past few years, including the Logistics Exchange Memorandum of Agreement (LEMOA) in 2016 that allows their militaries to use each other’s bases for repair and replenishment of supplies as well as provides for deeper cooperation.

India and US also signed COMCASA (Communications Compatibility and Security Agreement) in 2018 that provides for interoperability between the two militaries and provides for the sale of high-end technology from the US to India. In October last year, India and the US sealed the BECA (Basic Exchange and Cooperation Agreement) to further boost bilateral defence ties. The pact provides for sharing of high-end military technology, logistics, and geospatial maps between the two countries. 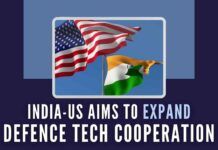