[dropcap color=”#008040″ boxed=”yes” boxed_radius=”8px” class=”” id=””]T[/dropcap]he Railway Budget for 2016-17 presented by Railway Minister Suresh Prabhu on Thursday, may have been criticised by all major political parties, but the Indian business fraternity hailed it, terming it a pragmatic budget with no passenger fare hike.

The views of the corporate bigwigs:

[dropcap color=”#008040″ boxed=”yes” boxed_radius=”8px” class=”” id=””]I[/dropcap]t is an extremely pragmatic rail budget based on the three critical strategy pillars.It is aimed at making railways the backbone of India’s overall development. The rationalisation of freight policy and review of public-private-partnership policy framework would help to attract private players for transforming rail transportation and increasing the revenue.

Reliance on technology through introduction of train sets, power saving initiatives and enhancement of passenger amenities will go a long way in improving the customer experience from Indian railways. Measures such as expanding of freight basket, building terminal capacity, among others would help augment revenues.

Railway minister has given a no-tariff-hike budget without compromising on the capital expenditure for increasing carrying capacity, both passengers and freight even in a challenging economic environment marked by a severe slowdown in the commodity sectors, which are lifeline of railway’s earnings.

[dropcap color=”#008040″ boxed=”yes” boxed_radius=”8px” class=”” id=””]T[/dropcap]he employment focus of the budget is highly encouraging as railways shall generate 23 crore man days by 2018-19 of which 9 crore man-days are envisaged in 2017-18 and 14 crore in 2018-19. The rail budget 2016-17 rightly focuses on socio-economic upliftment of masses as the introduction of Antyodya Express and addition in Deen Dayalu coaches for unreserved travel rightly asserts it.

Railway Minister Suresh Prabhu’s announcement today on redevelopment of 400 stations through the private-public partnership (PPP) model is a very progressive and welcome move. This project will foster a plethora of large transit-oriented developments across the country, possibly resulting in the largest TOD (transit oriented development) undertaking in the world and thereby leading to higher transit ridership.

Connectivity of airports with railways would give a boost to the perishable goods sector and this would encourage the use of multi-modal transportation. However the budget doesn’t address explicitly the efforts to increase the share of movements by rail compared to road sector. The modal mix is still heavily tilted to road and the recent drop in fuel prices has further fueled the growth in road movements. In the same period rail freight rates have increased making it a big challenge for industry to shift.

[dropcap color=”#008040″ boxed=”yes” boxed_radius=”8px” class=”” id=””]I[/dropcap]n this budget, Indian Railways has taken a step further towards smarter transportation. GPS- based digital display in coaches and the introduction of bar-coded tickets not only bring more transparency but will also enhance security and comfort for the traveling public. The scheme of Wi-Fi installations in 500 railway stations by next year, will witness a further reduce in the country’s digital gap.

Prabhu didn’t give in to hiking fare as an easy solution to resources woes. Instead, he has proposed enhanced revenue mobilization through more innovative means. Amongst key misses, last year’s announcement about a five year investment plan of Rs.9 lakh crore didn’t find any mention.

The government move of expanding e-catering to 400 stations and decouple food distribution with food preparation will be extremely helpful for us.

It is also good to witness a slew of initiatives that will use modern technology such as Wi-Fi at stations, automated ticket machines, bio toilets and bar coded tickets and all this with no hike in passenger fares. The rail budget is also looking to enhance connectivity to the northeastern states and the beautification of stations at pilgrimage centres which will help promoting tourism to these places.

[dropcap color=”#008040″ boxed=”yes” boxed_radius=”8px” class=”” id=””]T[/dropcap]he railway budget is in line with the government’s vision of achieving holistic growth of the Indian Railways. It is very heartening to note that the government is focused on developing railway infrastructure with renewed vigour and is targeting a capital expenditure of Rs.1.21 lakh crore for 2016-17; an increase of 20 percent year-on-year.

Railway Minister Suresh Prabhu’s second rail budget displays a positive approach towards tackling issues, a commitment towards quality management and an attempt to make structural changes. Despite a tough financial and economic situation, customers have been spared from any fare hike.

The Kharagpur Vijaywada freight corridor would provide an additional transport backbone for the proposed East Coast Economic Corridor extending from Chennai to Kolkata. It would also provide an additional fillip to the newly-formed state of Andhra Pradesh. All states benefitting from these corridors should take this opportunity to develop industrial clusters along these corridors and start related activities like land acquisition etc.

The proposed budget does not envisage an increase in passenger kilometre or passengers, however earning from various segments are forecasted to grow by an average of 10-12 percent, thus leaving the door open for fare hikes during the year.

[dropcap color=”#008040″ boxed=”yes” boxed_radius=”8px” class=”” id=””]T[/dropcap]he railway minister has done delicate balancing by re-imagining railway operations to make it among the best in the world and at the same time proposing to meet the increased expenses mainly by monetising the assets at its command and borrowing from multilateral institutions and national sources like LIC.

Aimed at showcasing a positive future for railways in India; the inclusion of GPS based digital displays in coaches, and the setting up Wi-Fi internet in 100 stations this year, are initiatives that will not only streamline services in the railways, but also benefit customers across the board.

Here is an excellent post on how PM Modi’s imprint is evident in Suresh Prabhu’s Railway Budget. 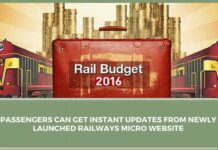