[dropcap color=”#008040″ boxed=”yes” boxed_radius=”8px” class=”” id=””]T[/dropcap]he rail tariff has not been hiked as of now, they have also announced a slew of measures for comfortable travel, however, the concerns remain over raising funds for the future project as the operational efficiency has taken a beating.

The budget presented by Railway Minister Suresh Prabhu in Lok Sabha on Thursday is just a basic – which shows goals set by him for the upcoming fiscal year on a host of count remained to be realized, on revenue mop-up, receipts from passengers and freights.

The often used parameter for measuring a rail management’s competence is operating ratio, which suggests how much of generated revenue is left after spending on day-to-day operations. Globally, a 75-80 percent or lower operating ratio is seen as a healthy benchmark — the lower the better.

Minister Prabhu, a chartered accountant by profession, targeted to bring it down to 88.5 percent this fiscal — or the lowest in nine years, from an unsustainable level of 93.6 percent in 2013-14 and 91.8 percent for 2014-15. But the revised estimates indicate a much higher figure.

[dropcap color=”#008040″ boxed=”yes” boxed_radius=”8px” class=”” id=””]F[/dropcap]”or 2016-17, we expect an operating ratio of 92 percent after including the immediate impact of the 7th Pay Commission against 90 percent likely to be achieved in the current year,” he said in his 68-minute speech, indicating the ministry was ill-prepared for even a normal matter like a wage hike.

It is against this backdrop that doubts arise on the promise of an almost Rs.21,000-crore hike in the plan size for the railways, that basically covers all the developmental projects, to Rs.1.21 lakh crore for fiscal 2016-17, as also an increase in receipts from both passengers and freight.

Prabhu’s calculations are based on factors like change of mindset and improving economy. “We have managed to break away from average capital expenditure of Rs.48,100 crore over the period 2009-14, and an average growth of only 8 percent per annum, to achieve a quantum jump,” he said.

“This year, our investment would be close to double of the average of previous years — a feat never achieved earlier. For the year 2016-17, the capital plan has been pegged at Rs.1.21 lakh crore,” he added. He also hoped for a 10-percent jump in total revenue.

[dropcap color=”#008040″ boxed=”yes” boxed_radius=”8px” class=”” id=””]S[/dropcap]pared a fare hike and promised involvement in the private sector better, industry chambers have reasons to cheer. But where will the money come from? Towards this, the minister is relying on sources like revenues and station redevelopment, and says bankable rail projects will be funding.

Prime Minister Narendra Modi was all praise for his minister. “While keeping the promises made in the last budget, this one makes an aspirational strategy for future. We’ve been successful to a large extent this year, and this budget has a promise to make it even better.”

A former rail minister himself who went against his party with a passenger fare hike, TMC leader Dinesh trivedi was critical: “Where was the actual budget? Did you hear any figures – what they achieved last year, what is the budget for this year? We are still waiting for the budget.”

The share markets also gave a thumbs down. Disappointment over lack of any big-ticket projects, rail-related stocks fell on Thursday — BEML by 3.29 percent, Siemens by 1.06 percent, ABB by 1.37 percent, Larsen and Toubro by 1.5 percent, and Timken by 2.31 percent. Some, though, rose.

[dropcap color=”#008040″ boxed=”yes” boxed_radius=”8px” class=”” id=””]Y[/dropcap]et, there were positive outcomes from the budget as well. For long there has been a charge that the network length of the Indian Railways hasn’t expanded commensurately — 0.06 times since 1989-90, even as passenger and freight traffic have increased 3.3 times and 2.2 times, respectively.

Prabhu said his ministry will surpass the target of commissioning 2,500 km broad gauge lines this fiscal — almost 30 percent higher than last year. “In the next year, we plan to commission 2,800 km of track,” he said, promising new tracks at 7 km per day against 4.3 km a day since 2008.

There were also a slew of measures for passengers: 65,000 more berths on trains, over 2,500 water vending machines, 17,000 bio-toilets inside coaches, 1,780 automatic ticketing machines, 120,000 concurrent users for e-ticketing, and e-catering services at 408 stations.

This apart, he said, the quota of lower berths for senior citizens will be hiked by 50 percent to 120 such seats per train, more stations will come under special scheme for old and differently abled passengers, and a new train “Tejas” will be introduced at 130 km per hour.

He also announced WiFi at 100 more stations this year and 400 more stations in the next, fully unreserved trains and double-decker sleeper coaches on high-density routes, 24X7 helpline for women, local art at stations, dignity for porters and better amenities at pilgrimage centres.

[dropcap color=”#008040″ boxed=”yes” boxed_radius=”8px” class=”” id=””]A[/dropcap]s regards ongoing projects, the minister said contracts for all dedicated freight corridors have been awarded, further connectivity has been provided in the north-eastern states, work is on track for rail projects in Kashmir and bids have been finalised for two loco factories.

Prabhu also promised a regulatory authority for railways soon, and sought cooperation from the opposition to make it happen. Perhaps, that’s the reason the fare hikes were kept in abeyance, leaving it to the watchdog to move towards dynamic pricing for such matters.

The network spans 29 states and three union territories via some 8,500 stations. It crisscrosses Baramulla in Jammu and Kashmir in the north to Kanyakumari in Tamil Nadu in the south and Ledo in Assam in the east to Naliya in Gujarat in the west.

Here is an informative post on history of rail budget. 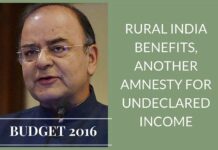