India is the master in her own house

India is a sovereign and self-respecting nation. She doesn’t need a certificate from any other country or any foreign think-tank as far as her socio-religious, politico-economic and foreign policies and constitutional relations between the Centre and States/ Union Territories are concerned. India is the master in her own house. It’s her constitutional right and duty to evolve and implement internal policies and maintain relations with foreign countries taking into consideration her paramount sovereign interests and genuine needs and aspirations of her citizens.

However, it would not be appropriate to ignore think-tank(s) outside India and foreign-based journals which, unlike the US, the UK, the Chinese and the Pakistani press, commends the Indian policies and expose their politically and religiously motivated India-based critics and vested interests. Such think tanks and journals need to be recognised and appreciated to call the bluff of vested interests in India. The case in point is what Saudi Arabi’s leading journal Saudi Gazette opined on April 1, 2021, on the Narendra Modi Government’s policy towards the strategically located Jammu and Kashmir (J&K) Union Territory.

The Saudi Gazette tore into those in Kashmir who had warned the Government of India that any attempt on its part to tinker with or dilute the special status of J&K would provoke explosions of portentous dimensions in J&K State in general and Kashmir in particular.

Reflecting on what it called “positive initiatives, including public welfare programmes, taken by the Indian Government in J&K,” the English language Saudi Daily, inter-alia, said: “The J&K youth have responded positively to the Modi government’s initiatives and have shown their desire to become a part of the progress of the country.

Even the local militants, who gave up arms after August 5, 2019, have been rehabilitated and have become a part of the national mainstream.” The government initiatives have given new life to Kashmiri youth, who during the past three decades were being misguided by ‘evil forces to take up arms in a proxy war’ against a welfare state”.

But more than that, the Saudi Gazette tore into those in Kashmir who had warned the Government of India that any attempt on its part to tinker with or dilute the special status of J&K would provoke explosions of portentous dimensions in J&K State in general and Kashmir in particular. It said: “Most of the local leaders of Kashmir who used to claim that ‘if J&K’s special status is revoked no one will be left in Kashmir to hold the tricolour’ have been proven wrong.”

Clearly, the Daily was referring to the J&K’s four former Chief Ministers – Farooq Abdullah, Ghulam Nabi Azad, Omar Abdullah and Mehbooba Mufti – and other ardent believers in the concept of J&K’s secession from India and limited accession with India.

That Saudi Arabia’s leading Daily put in perspective of the situation as it had been existing in Kashmir since August 5, 2019, could be legitimately construed as a big snub to those in the valley who had on and before August 4, 2019, warned New Delhi, again and again, to not touch Article 35A and Article 370 if the Centre wanted peace in the valley. Under Article 35A, the solitary State of J&K exercised an absolute right to grant or refuse J&K citizenship to any individual or a group of individuals. And, under Article 370, J&K State had the right to have a separate constitution and separate flag and also the right to exercise residuary powers.

Indeed, Article 35A, which was applied to J&K on May 14, 1954, bypassing the Parliament, and the “temporary” Article 370, which was applied to J&K on January 26, 1950, had created the separate J&K Republic on the soil of Indian Republic. No wonder then that the Kashmiri ruling elite used to the hilt these provisions to promote separatism based on religious fanaticism, create a wide gulf between New Delhi and J&K, fulfil their own insatiable lust for power and pelf and render the people of the state in general and Jammu and Ladakh, in particular, unreal and ineffective for all practical purposes.

The truth is that the Kashmiri ruling elite had jeopardised the vital national interest in Kashmir with the enemies outside leaving no stone unturned to exploit the engineered unrest in the valley to promote and advance further their geopolitical interests in the state calculated to dismembering India. Such was the situation in J&K before August 5, 2019, when the Narendra Modi Government in a most dramatic manner abrogated Article 35A and Article 370 and divided the State into Union Territories of J&K and Ladakh with the full concurrence of both the Houses of Parliament, including Rajya Sabha, where the NDA didn’t have the majority.

The Kashmiri politicians, without any exception, who had repeatedly claimed that “Article 370 was a bridge between J&K and New Delhi and J&K would automatically secede from India if Article 370 was abrogated,” did cry, but there was not a ripple of protest anywhere in J&K. Mehbooba Mufti, who had threatened New Delhi that “there would be nobody in the State to give a shoulder to tricolor if Article 35A and Article 370 were abolished”, did take on the Modi Government and hurled threats, but with no result. She was ignored by one and all, including many of her former colleagues in the party and the government. In fact, almost all have abandoned her. Another politician, Hina Bhat of the BJP, had warned that “she would lift gun if any attempt was made by the Narendra Modi Government to abrogate Article 370”. Today, she is an integral part of the BJP. The desperate and rattled Farooq Abdullah, who had denounced the Narendra Modi Government for “snatching Article 35A and Article 370 from Kashmir”, did declare that “the people of Kashmir would prefer China over India and China will help restore Article 370”, has almost no support-base left even in Kashmir. He has been only singing in the strain of the swan. He, like Mehbooba Mufti who was denied an India passport for national security reasons only the other day, is a disillusioned person. All his allegedly illegal properties in Srinagar and Jammu have been attached by the Enforcement Directorate and he is moving heaven and earth to get them back with even J&K High Court not upholding his pleas. Omar Abdullah, who used all kinds of invectives and epithets against the Narendra Modi Government post-Article 370 abrogation, has publicly said that “he is struggling with the question of whether he should continue in politics”. “He has no easy answers and has a lot of doubts,” he has also said. The story of other Kashmiri politicians is no different. They are all in a state of shock but unable to arouse passions anywhere in the valley.

In short, what the Saudi Gazette opined needs to be viewed in the context of what Kashmir has been witnessing since August 5, 2019. 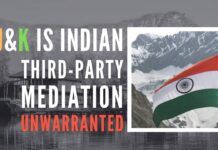