[dropcap color=”#008040″ boxed=”yes” boxed_radius=”8px” class=”” id=””]A[/dropcap]mong South Asian economies, India made the biggest improvement in business regulations, moving up in the ease of doing business ranking from 134 to 130, according to a new World Bank Group annual report. India also ranked amongst the world’s top 10 in Protecting Minority Investors with a global ranking of 8, noted the “Doing Business 2016: Measuring Regulatory Quality and Efficiency” report released here on Tuesday.

The report noted that the Indian law grants minority shareholders strong protection from conflicts of interest and provides extensive rights for shareholders in major corporate governance.

India, the region’s largest economy, implemented two reforms during the past year, it said.

[dropcap color=”#008040″ boxed=”yes” boxed_radius=”8px” class=”” id=””]I[/dropcap]n Starting a Business, for example, India made significant improvements by eliminating the minimum capital requirement and a business operations certificate, saving entrepreneurs an unnecessary procedure and five days’ wait time. The electric utility in Delhi made the process for getting a connection simpler and faster by eliminating the internal writing inspection by the electrical inspectorate. And the electric utility in Mumbai reduced the procedures and time required to connect to electricity by improving internal work processes.

Bhutan and Sri Lanka also implemented two reforms each during the past year, while Afghanistan, Bangladesh and Maldives undertook one reform each.

The highest number of reforms were in the areas of Starting a Business, Paying Taxes and Getting Electricity, with two reforms in each area.

No reforms were recorded in the areas of Trading Across Borders, Protecting Minority Investors, Enforcing Contracts, and Resolving Insolvency.

“South Asian economies have been advancing steadily in recent years in improving their regulatory environment and making it more business friendly,” said Rita Ramalho, manager of the Doing Business project.

“In doing so, the region can stimulate both entrepreneurship and job creation for its relatively young population,” she said.

[dropcap color=”#008040″ boxed=”yes” boxed_radius=”8px” class=”” id=””]O[/dropcap]n average, the region’s economies rank best in the areas of Starting a Business (with a regional average rank of 96) and Protecting Minority Investors (regional average rank of 83). The region’s weakest performance is in the areas of Enforcing Contracts and Registering Property. For example, it takes an average of 1,077 days to resolve a commercial dispute through the courts.

The report noted that globally 85 developing economies implemented 169 business reforms during the past year, compared with 154 reforms the previous year. High-income economies carried out an additional 62 reforms, bringing the total for the past year to 231 reforms in 122 economies around the world.

“A modern economy cannot function without regulation and, at the same time, it can be brought to a standstill through poor and cumbersome regulation,” said World Bank chief economist and senior vice president Kaushik Basu.

“The challenge of development is to tread this narrow path by identifying regulations that are good and necessary, and shunning ones that thwart creativity and hamper the functioning of small and medium enterprises,” he said. 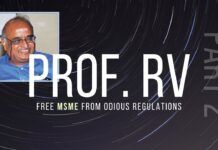 MSME needs to be set free for India to bounce back, says Prof RV Welcome to the world of investing!