India upset at the reference to Modi

India is upset at a reference to Prime Minister Narendra Modi by a US State Department official while defending the immunity it had extended to Saudi Arabian ruler Mohammad bin Sultan, who is facing allegations of killing journalist Jamal Khashoggi. “Frankly, I fail to understand how the comment on Prime Minister Modi was either relevant, necessary or contextual,” Ministry of External Affairs (MEA) spokesperson Arindam Bagchi said responding to questions about a US official referring to Modi while explaining the reasons for granting immunity to the Saudi ruler.

“Our two countries enjoy a very special relationship which is growing from strength to strength and we look forward to working with the US to further deepen it,” he said, referring to the bilateral ties between India and the US. When asked about giving immunity to the Saudi Crown Prince over the killing of journalist Jamal Khashoggi, US State Department principal deputy spokesperson Vedant Patel said in a briefing last Friday that this is not the first time that the US has done this and it has been applied to a number of heads of state previously, including PM Modi.

When asked about giving immunity to the Saudi Crown Prince over the killing of journalist Jamal Khashoggi, US State Department principal deputy spokesperson Vedant Patel said in a briefing on Friday, “This is not the first time that the United States has done this. It is a longstanding and consistent line of effort. It has been applied to a number of heads of state previously.”

He said: “Some examples: President [Jean-Bertrand] Aristide in Haiti in 1993, President [Robert] Mugabe in Zimbabwe in 2001, Prime Minister [Narendra] Modi in India in 2014, and President [Joseph] Kabila in the DRC in 2018. This is a consistent practice that we have afforded to heads of state, heads of government, and foreign ministers.” The US had denied Visa to Modi in 2005, accusing his role in the Gujarat riots, charges including genocide till May 2014. But when Modi became Prime Minister, the US withdrew the entry ban on him.[1]

No PM visit in December

Taking exception to a US report claiming that religious freedom and related human rights are under threat here, India’s spokesperson termed them as “biased and inaccurate.” He also said the US Commission for International Religious Freedom’s (USCIRF) latest observations continue to be guided by its prejudices and pursues a motivated agenda. The USCIRF is a Congressional-appointed body. Its recommendations are, however, not mandatory to be implemented by the US State Department.

Religious freedom and related human rights in India are under ongoing threat, the USCIRF alleged on Tuesday in an unusual year-end update of the status of its assessment of religious freedom in the country.

Asked about the report at a media briefing, Bagchi said, “We consider these biased and inaccurate observations about India by USCIRF. They (USCIRF) have a tendency to consistently misrepresent facts and this shows their lack of understanding of India, our constitutional framework, plurality, and our robust democratic system.”

“Given its past record, we are not surprised to see that USCIRF continues to be guided by its prejudices and pursues a motivated agenda that calls into question its own credibility,” Bagchi said. In its 2022 Annual Report earlier this year, the USCIRF recommended that the US Department of State designate India as a “country of particular concern” for engaging in or tolerating systematic, ongoing, and egregious religious freedom violations, as set forth by the International Religious Freedom Act. The US State Department has refused to incorporate the commission’s recommendations so far.

[1] Modi among examples cited by US for immunity shield to Mohammed bin Salman – Nov 20, 2022, The Indian Express 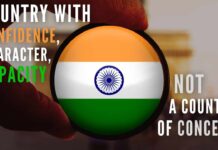 Sikh delegation to meet MEA on kidnapping, forced conversion of woman in Pakistan