India’s coal imports drop; domestic coal production is up by 20%

Due to this, coal imports for blending by the domestic coal-based (DCB) power plants have dropped to 8.11 MT in the year 2021-22, which has been the lowest coal import in the last eight years.

The Ministry said that the coal production is at 777 million tonnes (MT) in 2021-22. Domestic coal production continues to witness an upward trend in the current financial year as well.

In addition to that, about 4.5 MT of coal stock is available at various good shed sidings, private washeries and ports, and is waiting to be transported to power plants. 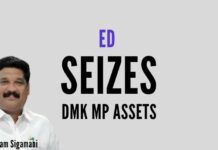 ED seizes Rs 8.6 crores worth assets of DMK MP Gautham Sigamani for illegal investments in Indonesia and Dubai. Karunanidhi family on the ED... Elon Musk expects China Tesla sales to catch up with US...